Looks like Mamma Biscuit made a new friend while taking a stroll on Pier 86 yesterday. Normally our Biscuit Lady is indifferent to the many dogs that she encounters on her walks throughout this city (we donâ€™t blame her, most dogs seem to only be interested in mounting her) however, Mamma was quite surprised to run into a creature of the hard-shell varietyâ€”and she was totally entranced!

His name is Lollypop and his owner informed us that his general life span is about 150 years (thank goodness, at least someone, or shall I say something will be alive in this city to see the 2nd Avenue subway line completed). Lollypop is currently 7 years old (green with envy here, has anyone seen my youth?) and he will most likely have numerous owners as each will have to make provisions for where Lollypop will end up once they kick the bucket! 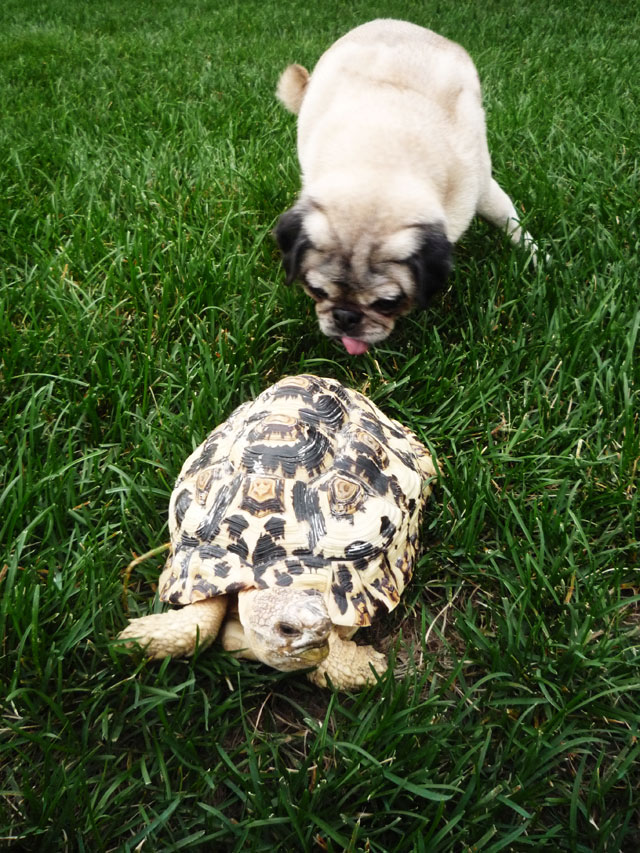 So here are a couple of photos of Mamma Biscuit coming dangerously close to Lollypop the Turtle. Itâ€™s rare to witness our Biscuit Lady being so animated around another living being thatâ€™s not human but when she does, she almost becomes obsessive! She would not leave Lollypop aloneâ€”and of course Lollypop was no match for our gremlin as he tried to run away from her. All he wanted to do was to snack on a few blades of grass!

This entry was posted in NYC Life, Oddities, Outdoor Life. Bookmark the permalink.