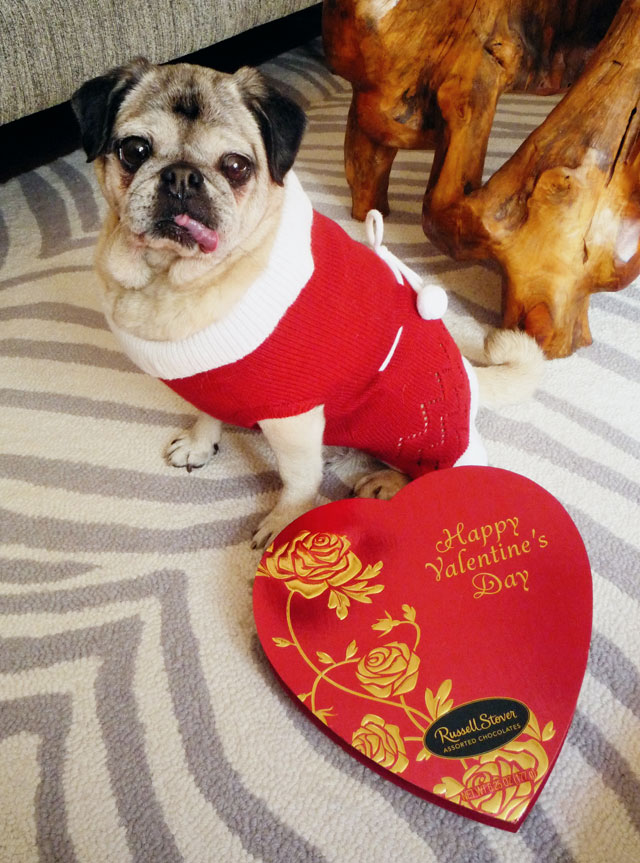 Early Saturday morning there came a knock at our front door. I rarely like to answer the door because the last thing I want to do is get into a heated debate with an annoying Jehovahâ€™s Witness about whether God really exists while standing half naked beside my half opened doorâ€”or worse, having to tell the bug guy once again that his services are not needed at the pug palace because we actually clean our apartment and therefore rarely get any roaches! At any rate, I reluctantly went to my door upon hearing this gentle knock to see who it was through the peep hole and saw nothing on the other side of the door! I thought to myself â€œthose damn prankster kids have a lot of nerve playing ring and run on me, how dare they?â€ and I returned to the sofa to continue watching TV while Mamma Biscuit continued sleeping, curled up so warmly in her donut bed! A while later I heard a scuffle at the door again and I quickly shot up from the sofa and ran to the front door but this time I swiftly opened it, and there was no one around, however, I felt something plop on my foot and when I looked down, there it wasâ€”a Valentineâ€™s Day heart box of chocolates from Russell Stover with a small note that said I LOVE MAMMA BISCUIT written in chicken scratch on a piece of paper attached to it! 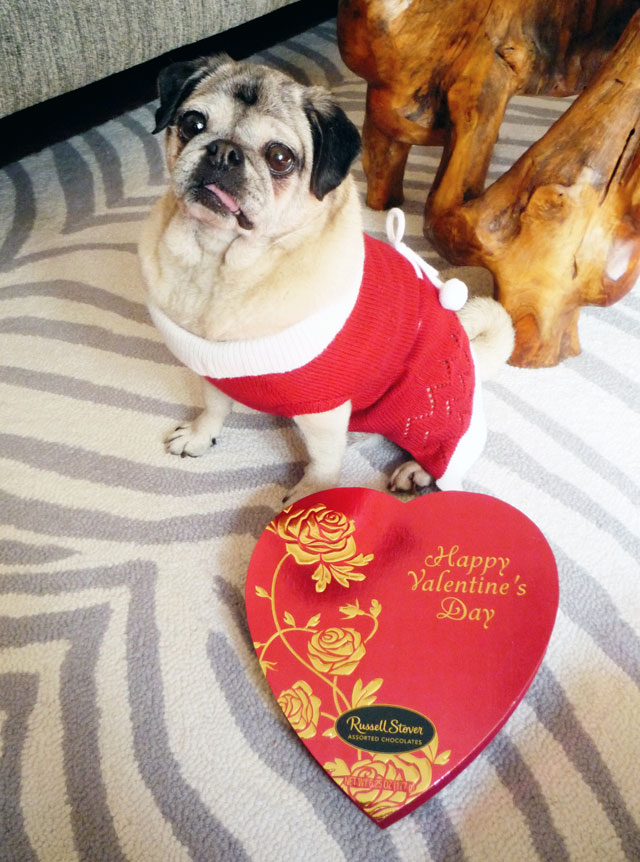 Well, Well I thought to myself, looks like our little harlot, scarlet, queen of Coney Island has been off to the races and has met a gentleman-dog-caller behind my backâ€”how dare she?!? If there is one thing Bing Crosby and I share besides our love for Christmas, itâ€™s that we are both very strict disciplinarian parentsâ€”although I donâ€™t hit my child, I just smother her with soft-chew treats instead! Now if there is another dog in the neighborhood that has eyes for my little girl, they better come barking for my permission first before making such a bold move as to send flowers, or worse, non vegan chocolate from some Valentineâ€™s Day stock at the local Duane Readeâ€”that stuff is toxic for dogs to ingest! Now when in the hell did my little Lana Del Biscuit go out on a date or simply meet another dog without my permission? Have I been dressing Mamma Biscuit too slutty lately? Be honest with me, I can handle it! Where did I go wrong here? Is this just the beginning of the end for me as Mammaâ€™s daddy? No one loves Mamma Biscuit more than I do and I literally felt threatened by this kind gesture as I stood there, almost completely nude (I was just wearing underwear) with this heart box in my hands! God I was so confused and I had so many questions slowly bubbling up to the surface that I wanted answers to! 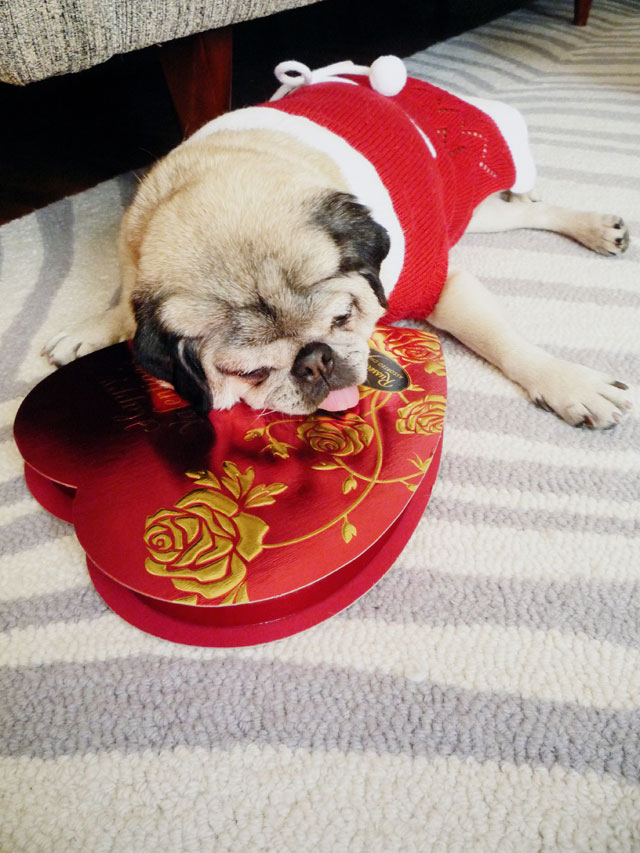 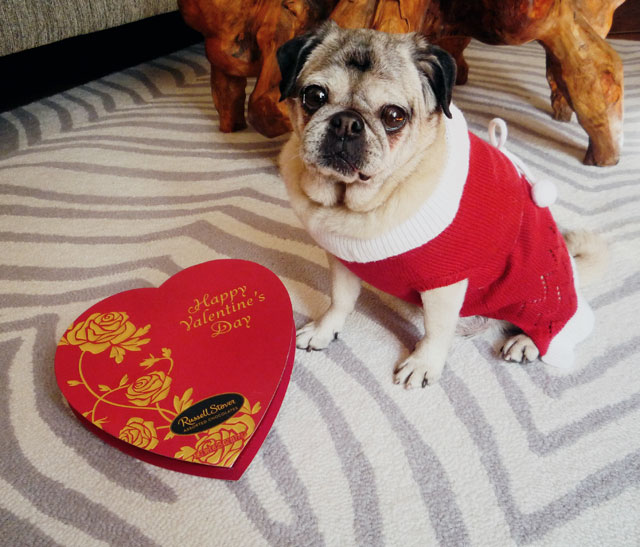 At this point, our little slut puppy awoke and sauntered over to the door as I closed it and she had the biggest smirk on her face! I looked at her and point blank asked her, â€œdo you know anything about this?â€ with an accusatory voice as I put the box under her nose. Thatâ€™s when her tongue unrolled out of her mouth and all I could do was laugh uncontrollably! Meanwhile, the rolodex of people I knew in my head was on speed-spin as I tried to think of who was behind such a giftâ€”and all I could come up with was the bug guy! Yes, for a hot moment I began to speculate that the guy who went door-to-door looking to spray sugar water in every kitchen in my apartment building had a side obsession with pugsâ€”specifically MINE! Thank goodness I came to my senses before I built the nerve to call Chris Hanson of To Catch A Predator to file a complaint! 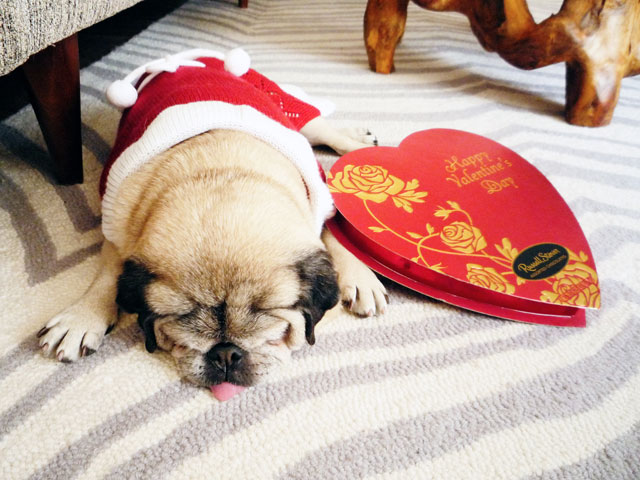 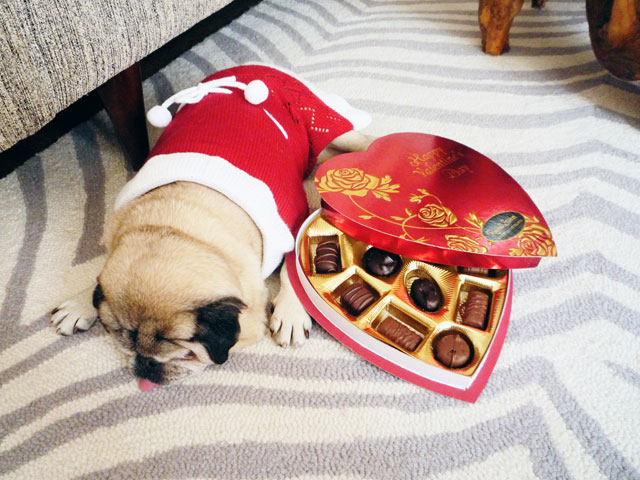 So the next best thing that I could do while waiting for Tommy to return from running an errand that morning was to dress the Biscuit Lady up in something red, throw on this sexy track on the record player, and take a photoshoot of her and this ridiculous gift from her secret admirerâ€”and here she is in all of her post gift-receiving glory! Honestly, it was the first time that I felt like a parent, looking at Mamma in a suspicious way, wondering who could be admiring her romantically from afar. I said to myself, â€œNow I know what fathers of their real daughters feel once their girl becomes sweet 16!â€ 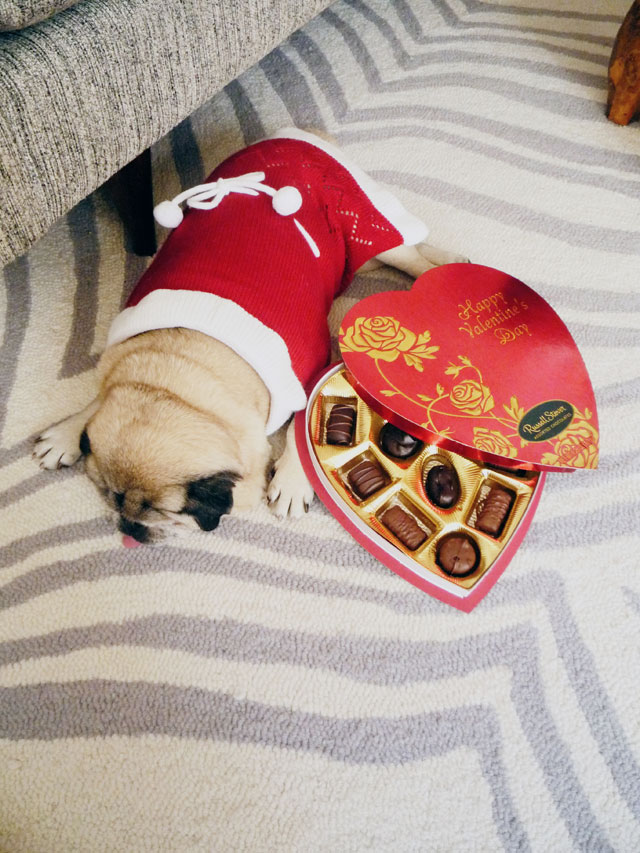 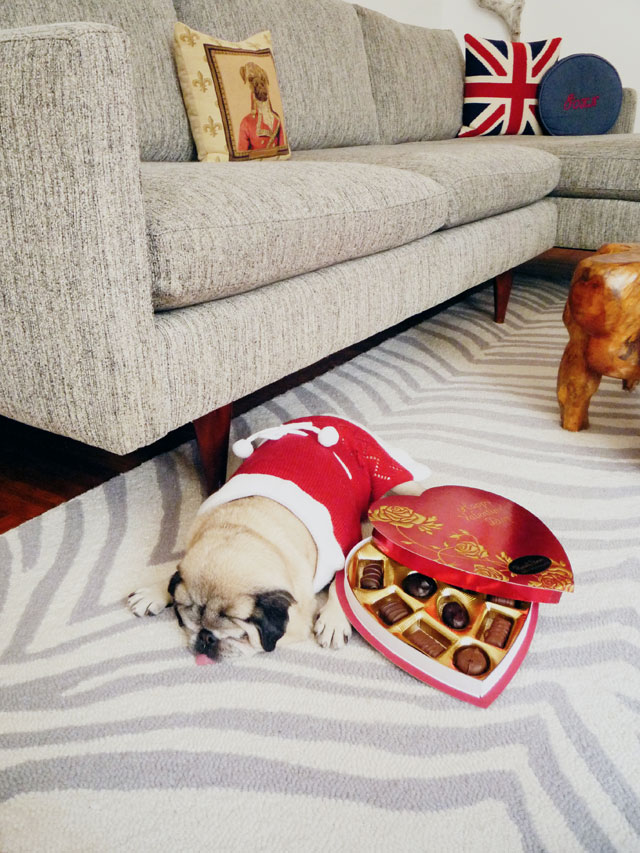 By the time Tommy returned home, the Biscuit Lady had fallen asleepâ€”practically on top of this box of chocolates! Our bitch doesnâ€™t care, she can take a nap on a bed of nails thatâ€™s how much she loves to sleep! Upon recounting the tale of Mammaâ€™s new secret admirer, Tommy quickly started laughing and within seconds admitted that he was the one who put the chocolates by the door! CAN YOU BELIEVE HIM? He found the box of chocolates in the basement, completely shrink-wrapped and unopened and decided to nearly give me a heart attack with this prank! 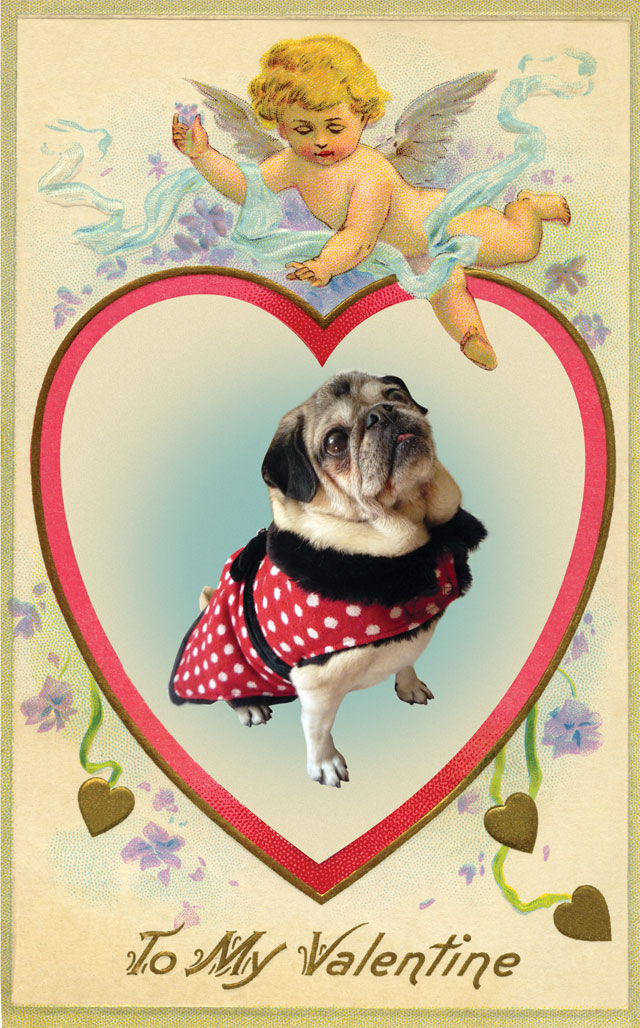 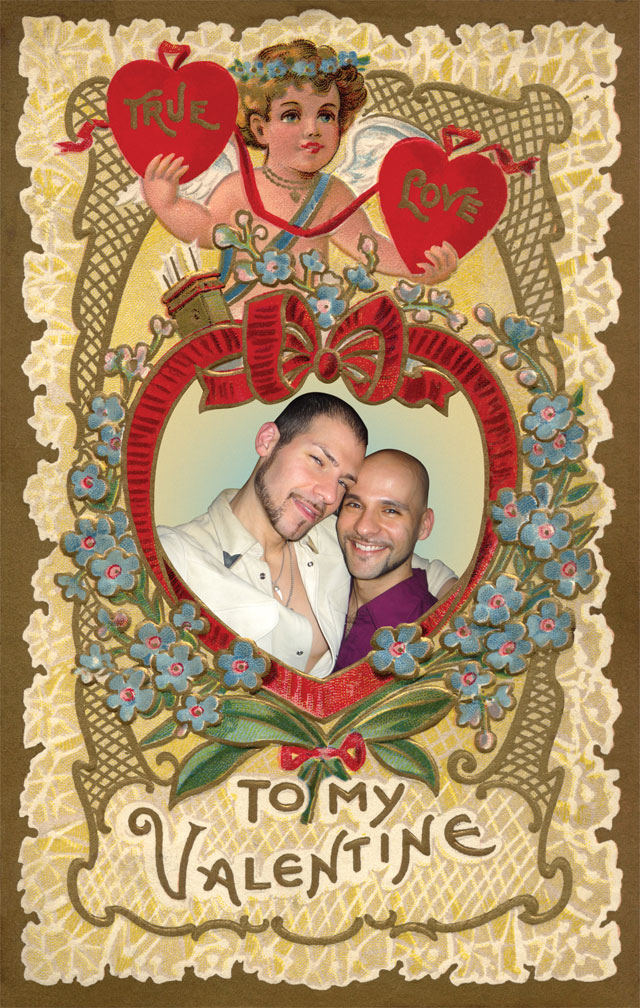 At any rate, The Biscuit Household would like to wish you all a very Happy Valentineâ€™s Day! Tommy and I will be spending the evening with our little pug, nestled between us, WHERE SHE BELONGS instead of gallivanting out on the town with some secret male pug loverâ€”or worse, some delinquent biker mutt with a spiky dog collarâ€”that would just break my heart! 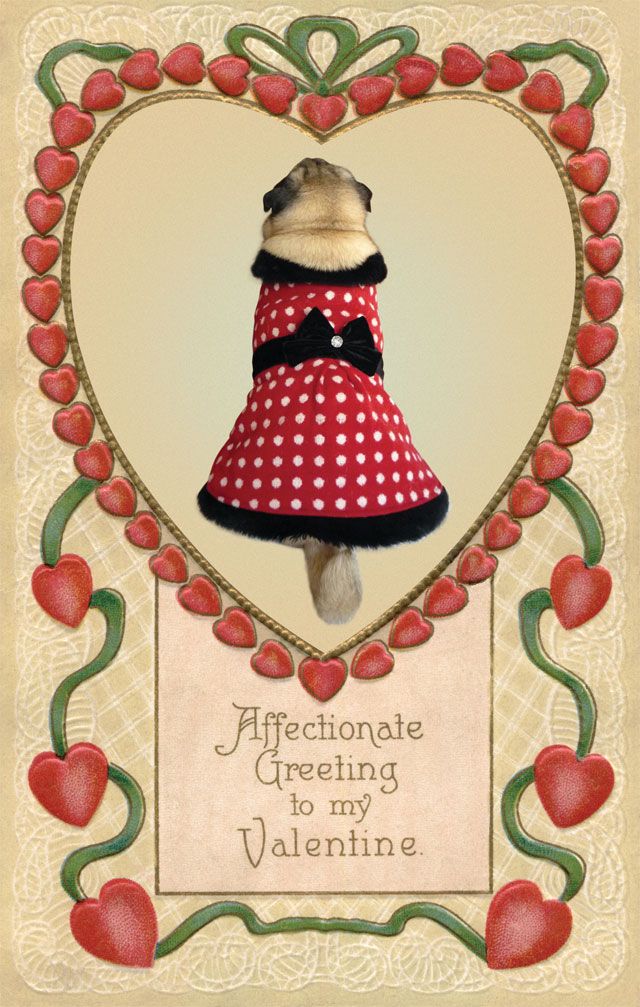