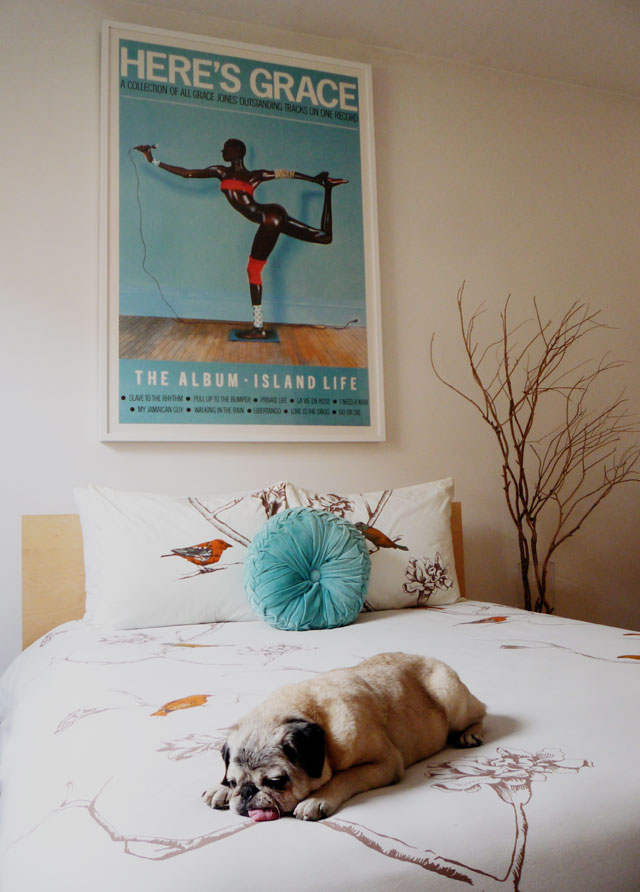 Pull up to Mammaâ€™s bumper baby and get down with our pug and her Island Life! Now Iâ€™m not talkinâ€™ about a tropical island here but rather the island of Manhattanâ€”and our little Gremlin Lady is no stranger to My Jamaican Guy when sheâ€™s off with Tommy prancing down 125th Street in Harlem to deliver some Sweet Semosh vegan baked goods! Now some may be a Slave to the Rhythm but Mamma Biscuit is a slave to nappingâ€”and she can swiftly stumble out of a fifteen hour nap for a fifteen minute kibble-nosh before nodding off again without fully opening up her puggie eyes. So here is Mamma Biscuit in all of her napping glory as she curls up on the master bed, directly below our new and original Grace Jones Island Life poster! This amazing piece of history is one of ten that were brought over from Paris, France and I had to whore myself out like Julia Roberts in Pretty Woman to get my paws on it! 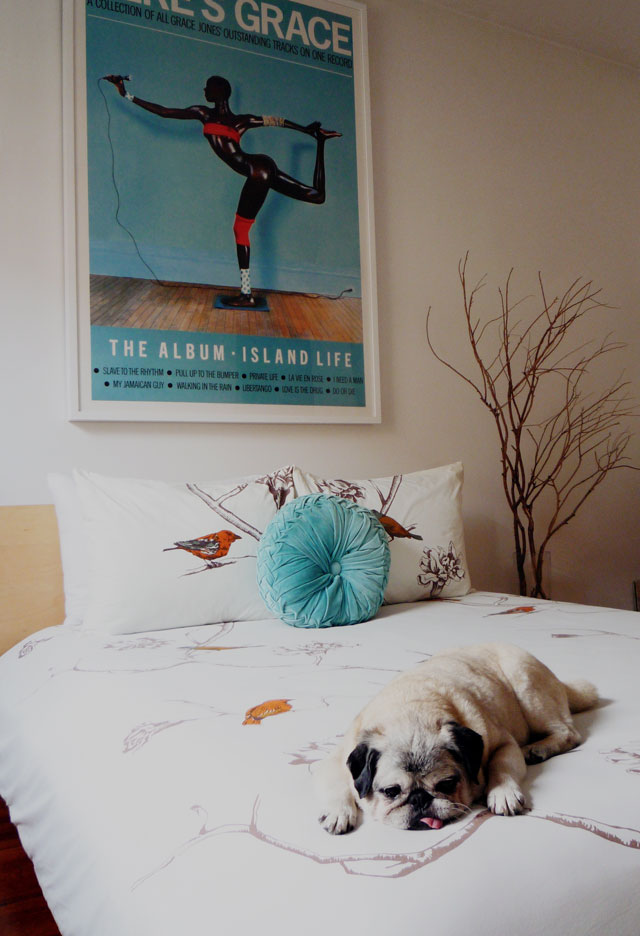 Ok people, listen up and listen good, this poster has brought so much excitement into my life in the last month I can barely stand it, however, not even this fierce piece of artwork can impress our old lady of the house. Itâ€™s really my fault though, I have spoiled Mamma Biscuit beyond return and these days, she has become so accustomed to the good life that it takes a lot to impress the bitch. I mean, Mamma Biscuit can totally give Olympic Gymnast McKayla Maroney a run for her money in the â€œnot impressedâ€ department hereâ€”and the pug can barely roll over on her back let alone do a proper somersault. 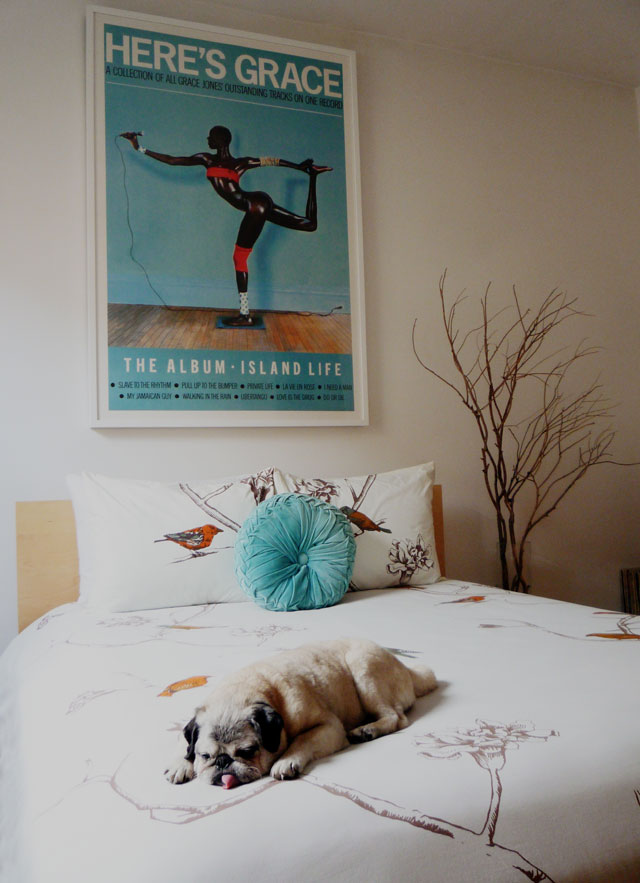 At any rate, letâ€™s discuss this fantastic piece of art and side-step the lazy pug that seems to resurface from photograph to photograph, weâ€™ll get back to her in a moment! 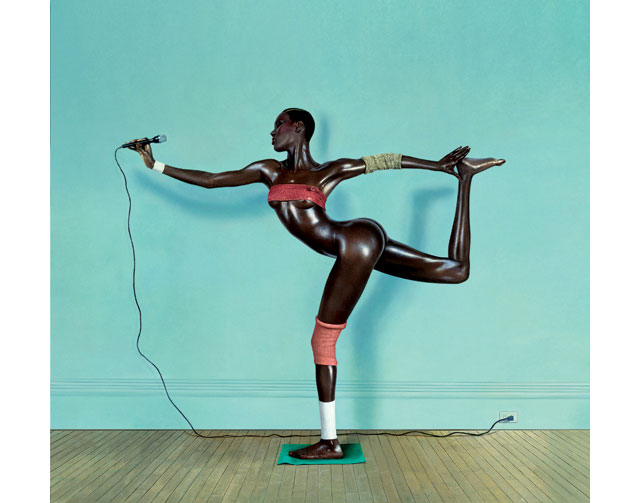 Photographer Jean Paul Goude took this photo in 1978 for a New York Magazine profile of Grace Jones. At that time, Goude was Jonesâ€™ lover and she was his muse.

â€œInitially, she was flattered by all of my attention,â€ says Goude. â€œAnd sheâ€™s no dopeâ€”Grace is an opportunist and she knew my vision was good for her career. Initially, she let herself be taken over, but then she suspected that I had only fallen in love with her image.â€

Well now, who wouldnâ€™t have fallen in love with this particular image let alone any other image from her entire catalog of stunning photographs throughout her career? Seriously, this photograph is phenomenal and so ahead of itâ€™s time. Take note Lady Gaga and all you ill-informed monsters out there, Grace Jones is the real deal when it comes to fashion, pop and the avant garde and definitely holds the second slot in our Pantheon of Queensâ€”I think you all know who comes first in our gay icons department and I donâ€™t even have to mention her name or her cone-bra wearing ways. Now about that New York Magazine article and the accompanying photographs of Grace Jones that was published thirty-four years ago, it transformed her into the major pop singer and gay icon she is todayâ€”and I have no doubt that this image was the vehicle to her rise!

Now If youâ€™re wondering how in the hell did Grace get her flawless body into that pose, the simple answer would be: she never did! In the prephotoshop days of the 70â€™s, Goude employed what was technically referred to as â€œvisual trickeryâ€ to achieve the unachievable! Goude photographed Jones in a variety of positions using clear, lucite boxes to hold up parts of her body and then combined the images in a montage that eventually became the amazing image that you see aboveâ€”and here is a visual breakdown of his process. 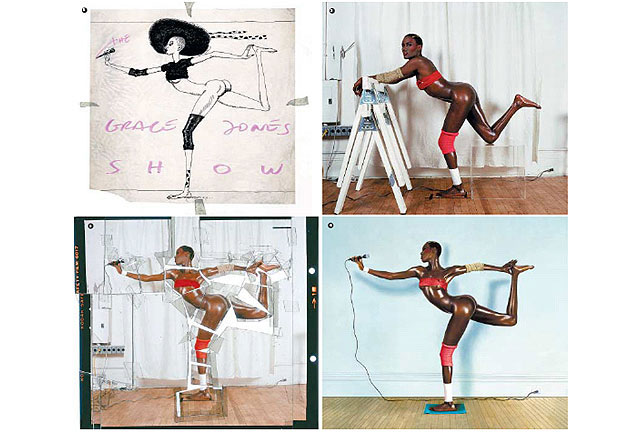 Describing the concept, Goude says â€œ. . . unless you are extraordinarily supple, you cannot do this arabesqueâ€ (the ballet pose in the picture). â€œThe main point is that Grace couldnâ€™t do it, and thatâ€™s the basis of my entire work: creating a credible illusion.â€ What a precursor to the current photoshop times of our livesâ€”where everything and everyone you see in a magazine or video has been pieced together, retouched and retooled digitally but the difference is, most of what we see in magazines today doesnâ€™t quite achieve the â€œcredible illusionâ€ that Goude was so interested in 1978. At any rate, in 1986, Grace Jones released an album entitled Island Life which was a collection of her biggest singles from Island Records and she pulled this image out from her archives to create this classic album cover.

While I was researching the making of this photograph and the background story of how it was used on the Island Life album, I came across this Lego version that was created by Aaron Savage . . . 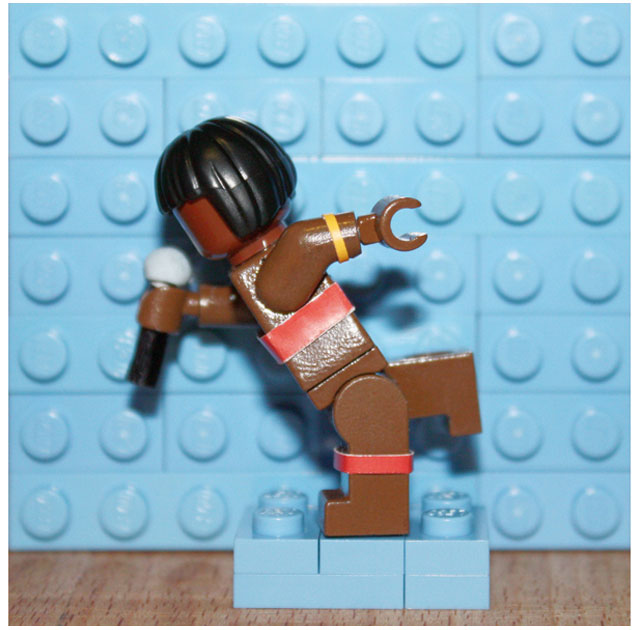 . . . and for all the graphic designers out there (like myself) here’s a mosaic rendition made entirely of Pantone swatches by David Marsh. Arenâ€™t they both so fabulous and inspiring to look at? 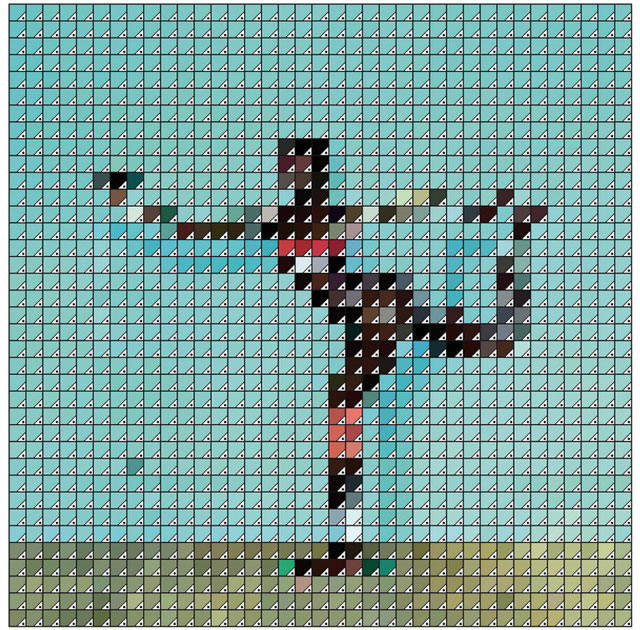 Now onto Mamma Biscuit and these lovely, sleepy portraits. I just can’t contain myself around my little girl when I have my camera in my handâ€”especially while sheâ€™s in such a lazy slumber. Our Girl can really capture the essence of pug beauty while basking in the natural daylight that floods into our bedroom through the window! 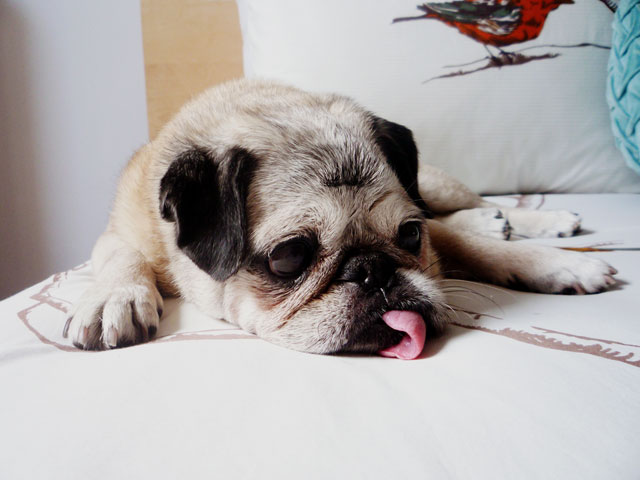 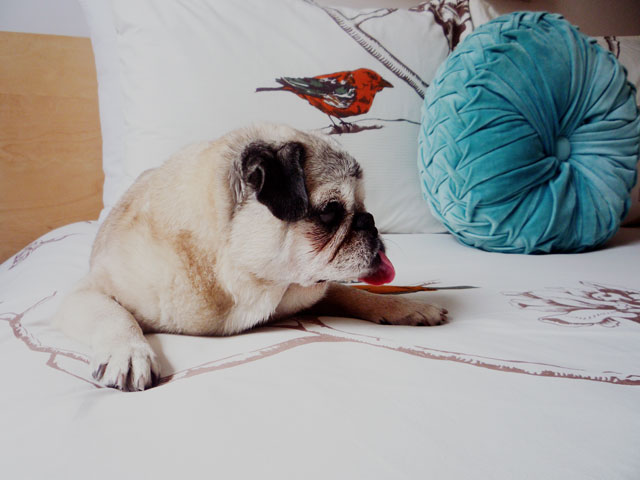 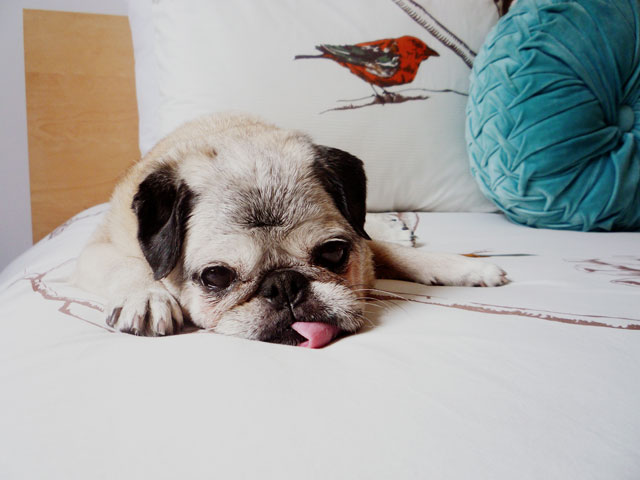 Lately, Iâ€™ve been calling Mamma Biscuit â€œsnuggle monkeyâ€ because it just sounds so cute and honestly, she really is starting to look more like a monkey to me as the days pass. Now I know some of you readers out there enjoy the term gremlin for Mamma Biscuit but I have many pet names that have been in rotation ever since our Biscuit Lady came into our lives. 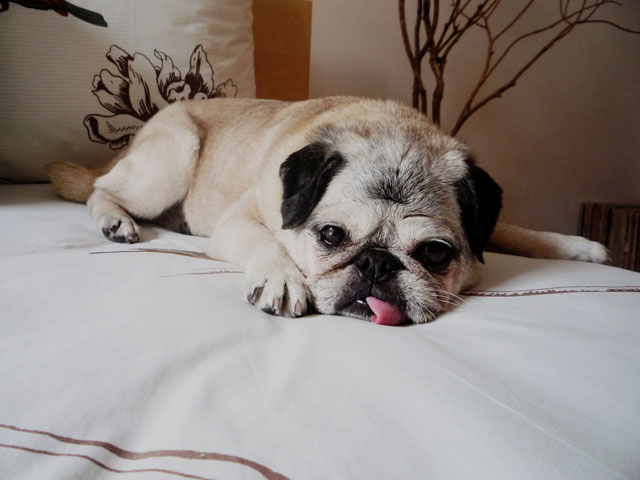 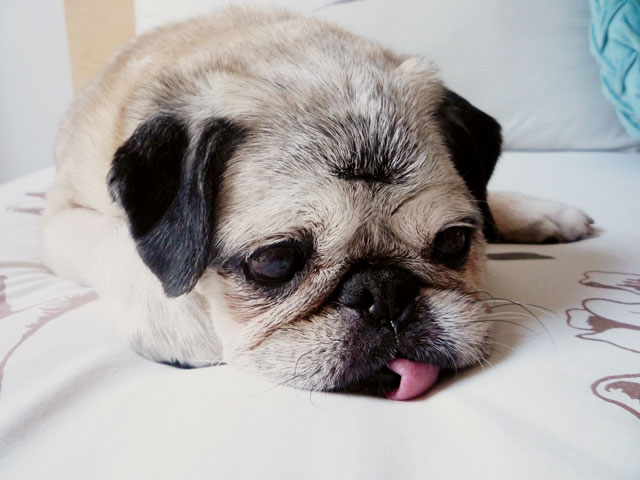 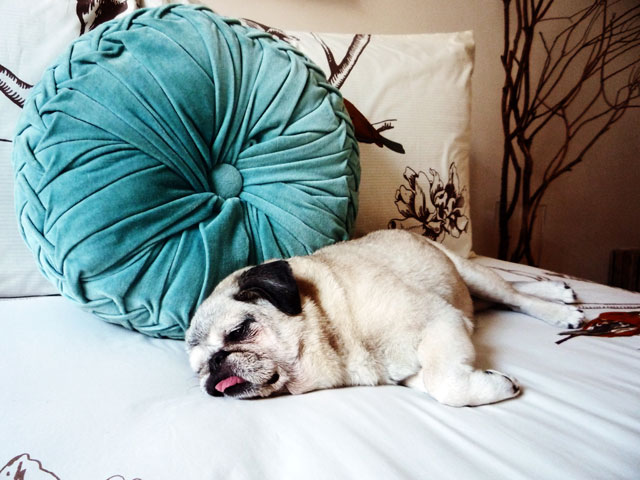 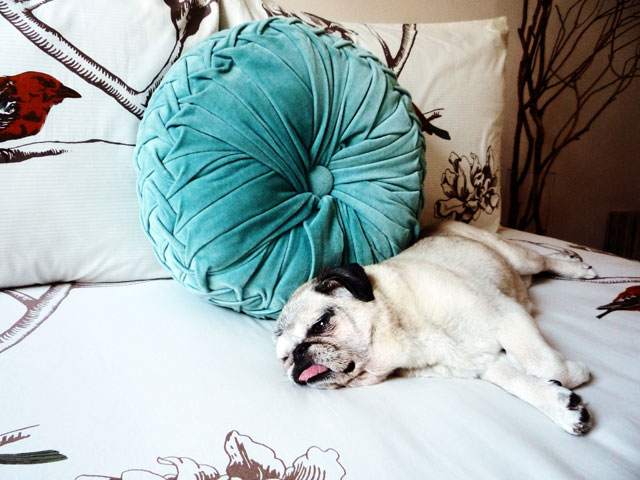 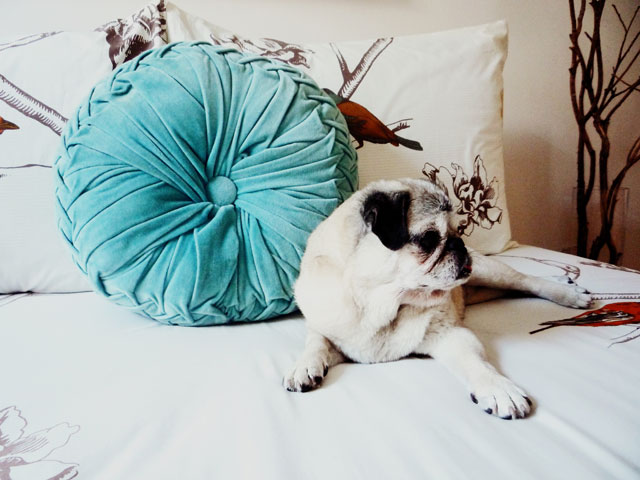 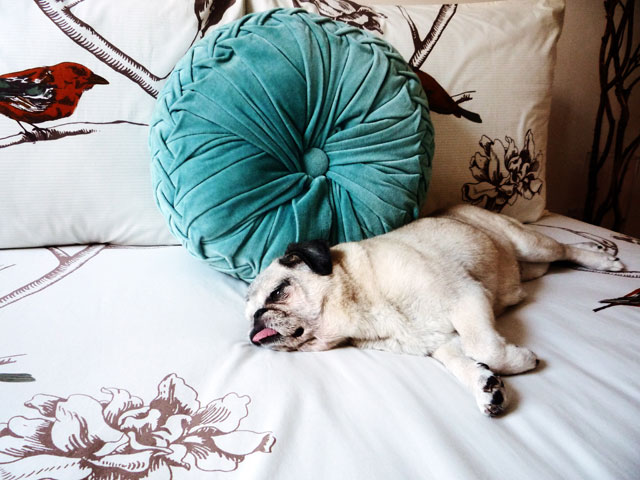 Like the ever-changing image of Grace Jones, Mamma Biscuit too has a whole roster of different aliases and pug looks in her bag of tricks however, despite how they both have a knack for reinventing themselves in such fabulous and dramatic ways, at the core, they are both beautiful creatures full of glowing light and talent!

Now about that â€œcredible illusionâ€ that Goude was talkin’ about as the concept for this incredible image that he has created of Grace Jones, take one look at this incredibly flawless performance of Slave to the Rhythm at The Queens Diamond Jubilee Concert and tell me if she’s just an illusion or the real thing baby!

This entry was posted in Design, Fashion, Music, Portraits. Bookmark the permalink.

8 Responses to Mammaâ€™s Got Grace!