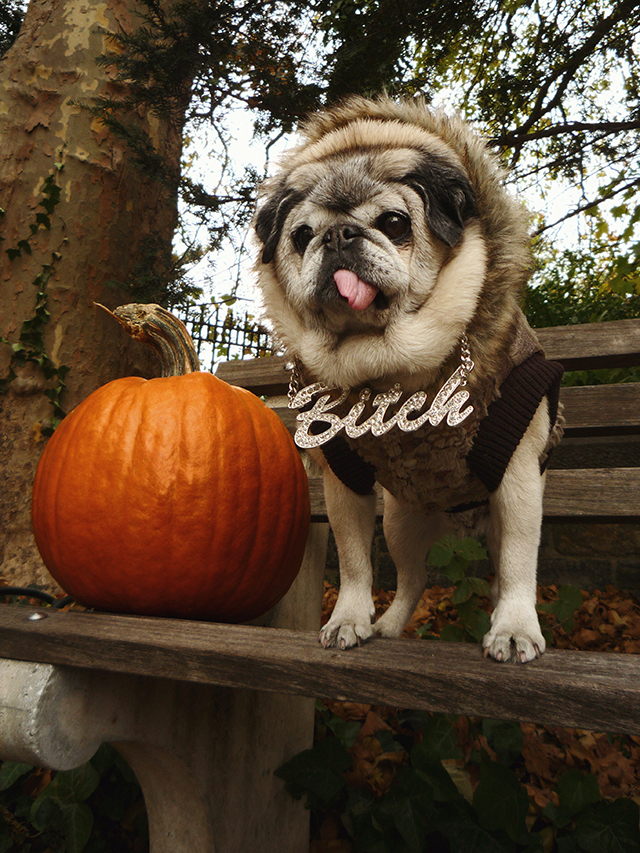 Picking a title for this post was as easy and entertaining as listening to Britney Spears say “It’s Britney, Bitch” under voice modification at the beginning of her song Gimme More—a tragically beautiful song with an equally tragic music video to boot! But Mamma’s not about to put a rat’s nest wig on her head, gain 35 pounds of slurpee/Cheeto weight and throw her pug legs up on a stripper pole to entertain you all! No, instead she’s gonna put on her best 125th Street/Harlem look, keep her muffin top tucked away and head to the park with what could be The Great Pumpkin that Linus has been waiting for all these years—all while sporting a giant BITCH name plate around her neck! Seriously, that pumpkin weighs about 50+ pounds and just dragging it up to the park for this endeavor was a huge strain on my back. However, we thought it would be a good idea to give you all one last Autumnal post before the temperatures really drop below freezing and we head full force into Christmas mode! After all, the Christmas tree is already up in the lobby of my building at work and I already have pangs of anxiety and feeling like I won’t get everything done before December first! 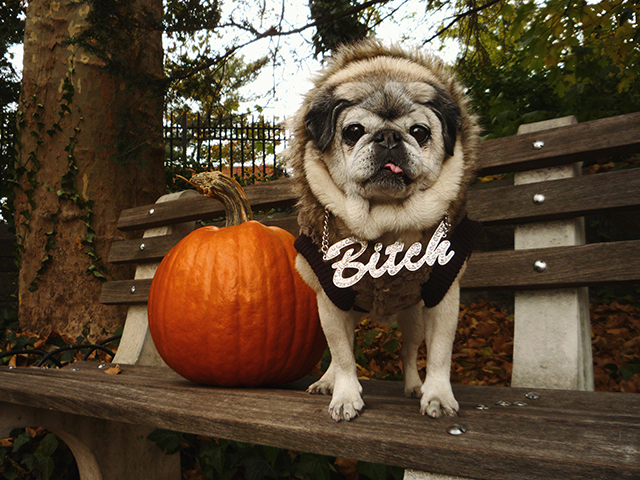 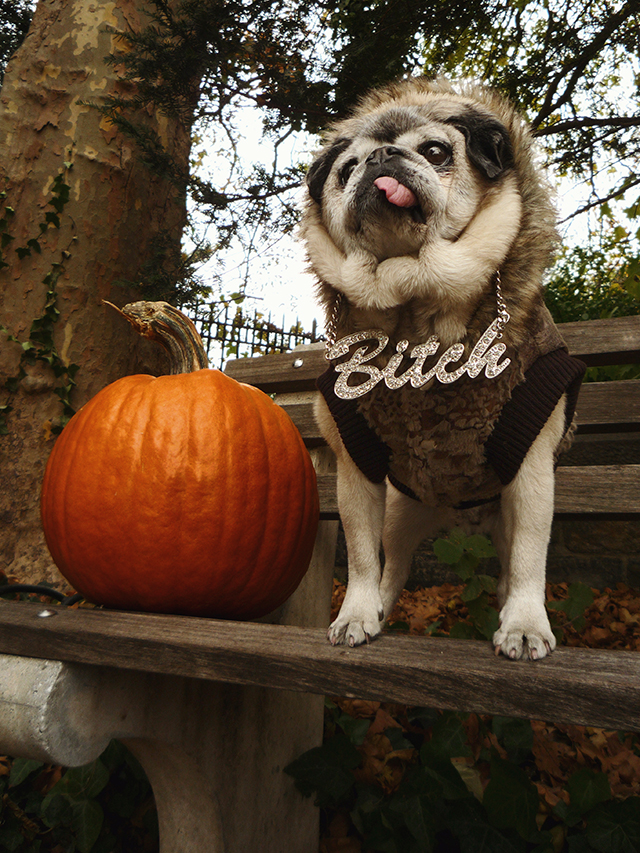 Now before we even touch upon our pumpkin, let’s discuss this ghetto fabulous look Mamma Biscuit is werkin’ here. Our little gremlin is sporting a “round-the-way-girl” faux fur hoody coat in chocolate brown paired with a blinged-out BITCH name plate—because that’s what she is, a female dog! I remember when Tommy and I purchased this BITCH necklace at a wholesale shop in the dirty thirties (the Schmatta District) over the Summer. We had a whole bunch of really vulgar jewelry in our basket and when we arrived at the check out counter, another customer looked at our selections and said (in a very nasty tone) “WHO WOULD WEAR THAT? To which Tommy (looking and pointing back at her selections within her basket) said, “WHO WOULD WEAR THAT? Tensions settled in for less then ten seconds before the sales clerk chimed in with, “Now, now, different strokes for different folks.” How dare she? Especially since the jewelry she was about to purchase was so pedestrian and boring. 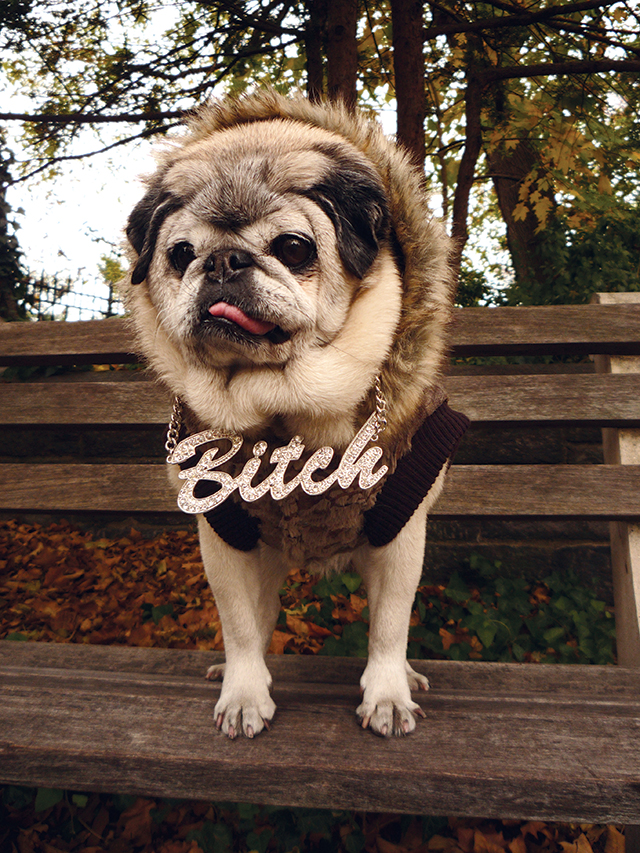 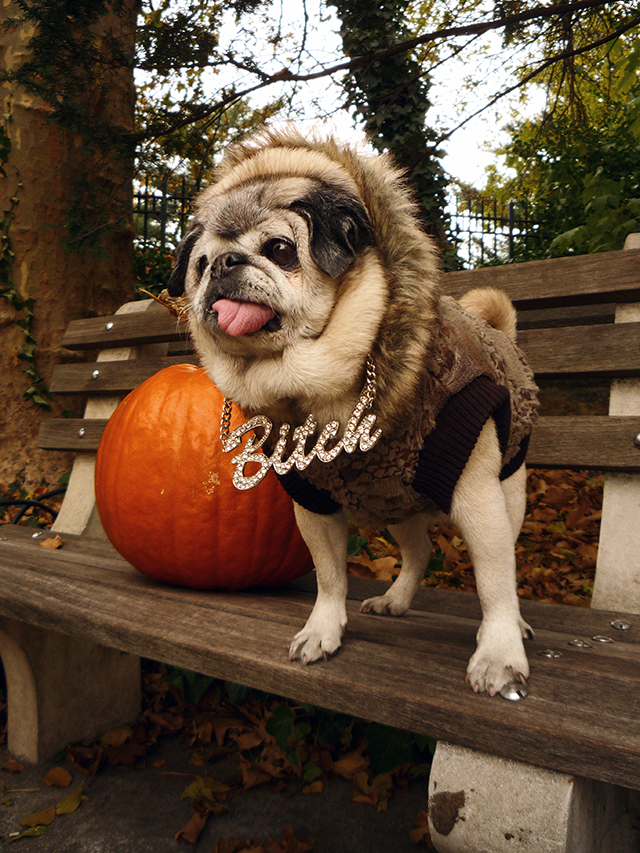 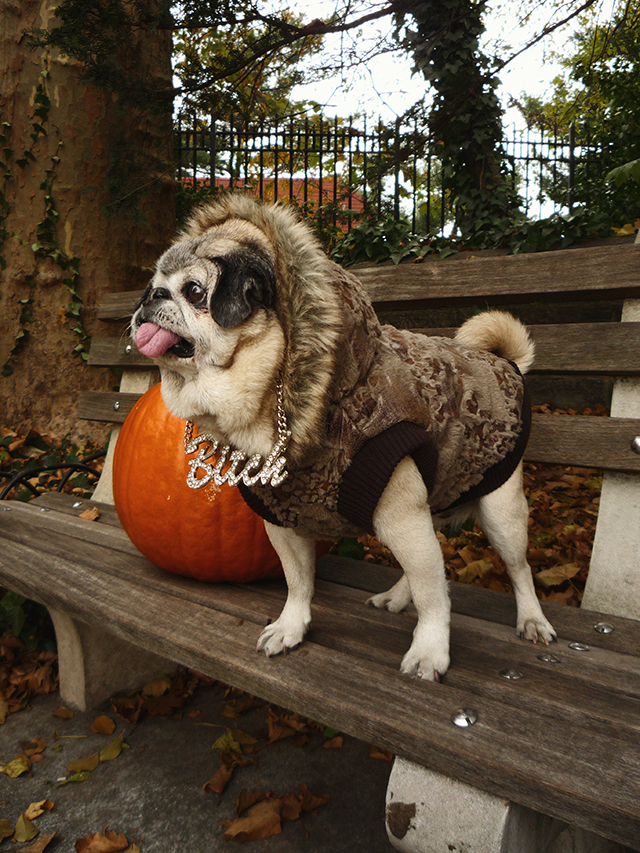 I’ll tell you (and her) who would wear THIS kind of accessory, Mamma Biscuit, that’s who—and she looks damn good wearing it too, don’t you agree? Mamma Biscuit sure knows how to carry a substantial piece of jewelry. What can I say, she’s a chip off the old block! 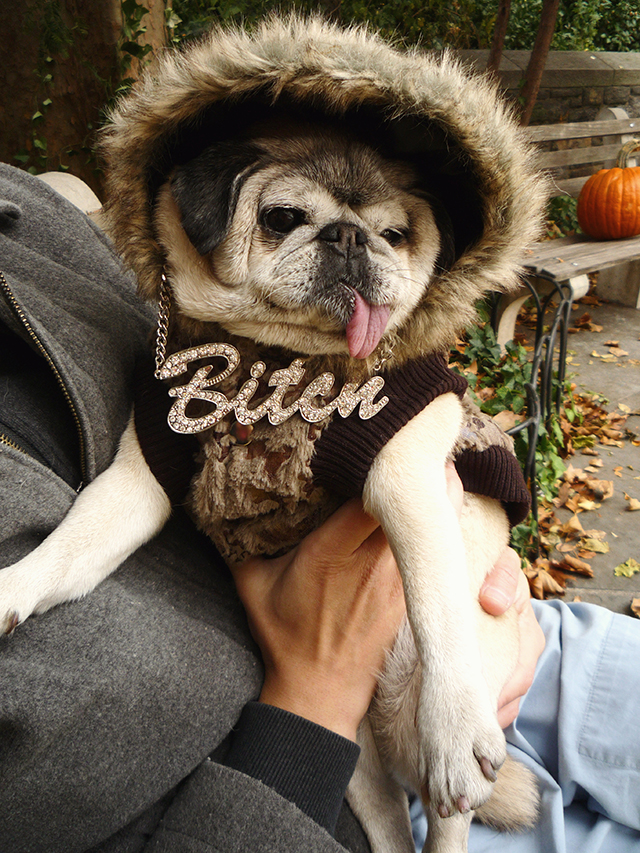 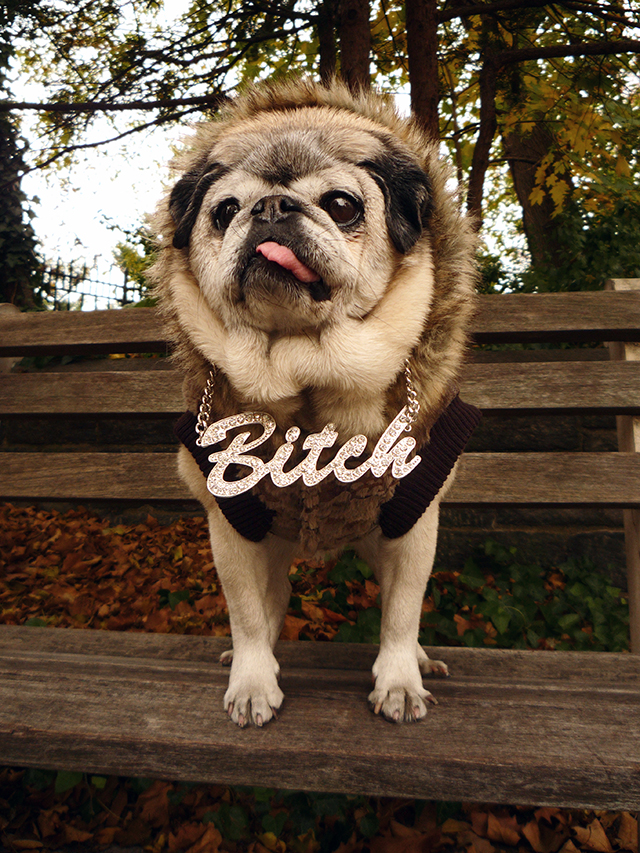 Now about that gigantic pumpkin, we decided to document it properly before it went off to slaughter (as Tommy put it) at my mother’s house. We brought this baby home from the apple orchard upstate several weeks ago and Tommy has been particularly fond of this pumpkin—so much so that he literally didn’t want to let it go. I had to remind him of the delicious fried pumpkin vegan fritters my mother will make with that pumpkin for Thanksgiving that he will inevitably enjoy—and that did the trick! Here’s Tommy saying one last farewell to the Great Pumpkin of the season, 2013! 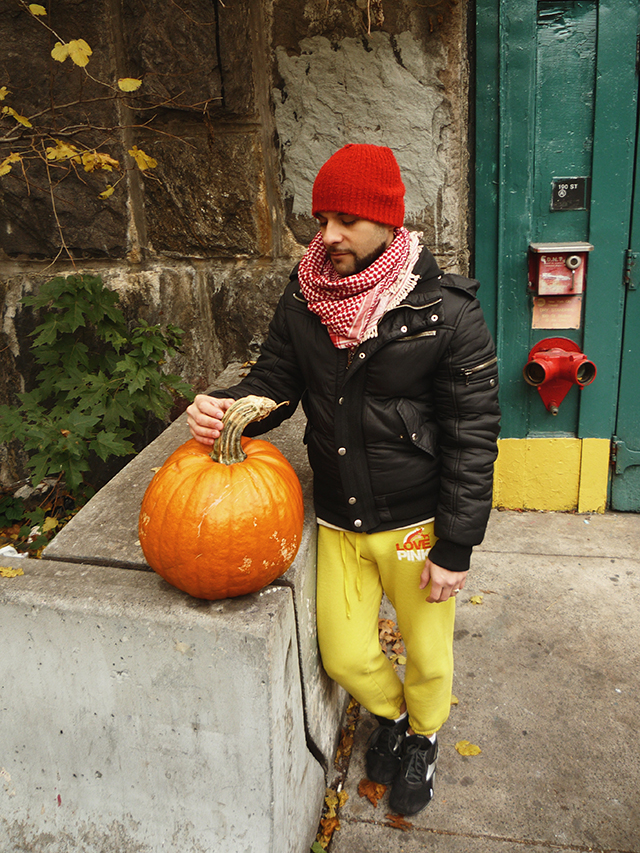 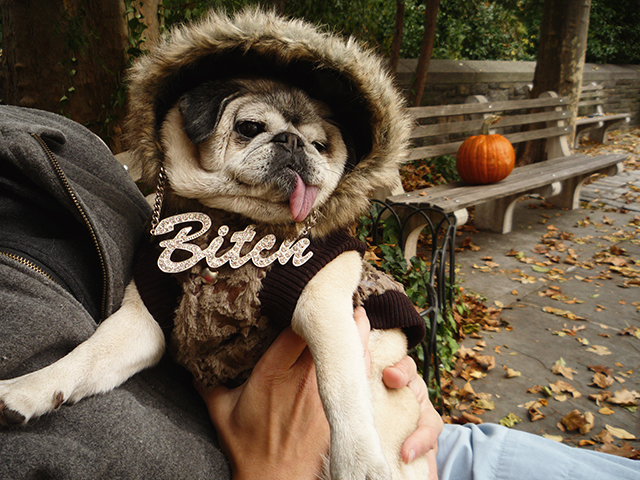 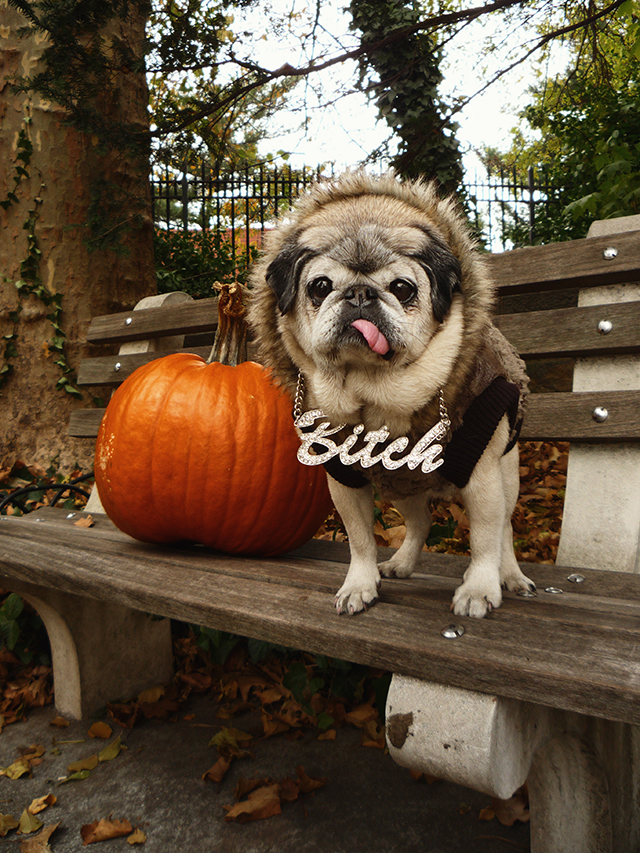 Even Mamma Biscuit was rolling her marble eyes at her Daddy for getting so attached to a damn pumpkin. I mean, our girl was dressed and ready for a day prancing through Harlem to pick up some hair extensions and to get her nails done, not to cry over a vegetable—and that’s the truth, BITCH!