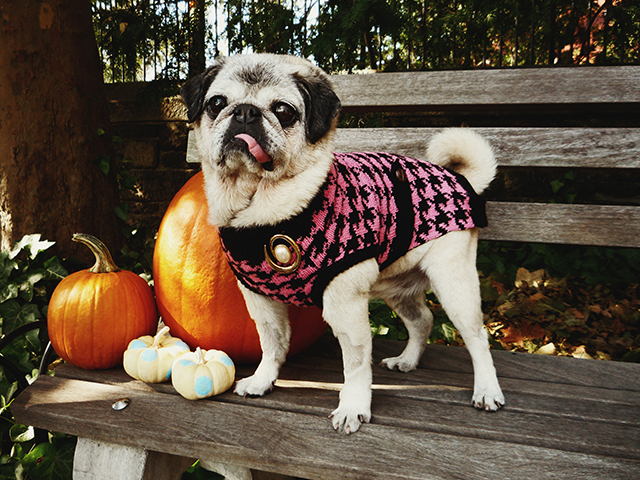 Did I ever mention to you all how much the Biscuit family loves Joni Mitchell? Seriously, Joni, in my opinion, is one of the most important singer/songwriters of our timesâ€”and despite the fact that sheâ€™s gone on record for saying that she thinks Madonna is a talentless opportunist (Iâ€™ll forgive good olâ€™ Joni for that and simply blame the swinginâ€™ 60â€™s drug use as a reason for her lapse in judgement), almost all of her lyrics from her entire catalog of music has given me perspective on people and life throughout the years. Now your probably wondering why Iâ€™m even talking about Joni Mitchell considering this is supposed to be a post about Thanksgiving and Mamma Biscuit, right? Well, Iâ€™m thankful for Joniâ€™s insightful contribution to our American folk-to-mainstream culture (even though sheâ€™s a native Canadian) but more importantly, I thought Iâ€™d take this opportunity to highlight the chorus lyrics of two very special songs from her earlier work to better illustrate a bigger point here:

Ainâ€™t that the damn truth Joni! In life, unfortunately, we donâ€™t know what weâ€™ve got till itâ€™s gone, however, Thanksgiving is the perfect opportunity for everyone to pause from their whirlwind of a life to reflect and give thanks to the many wonderful friends, family and animals in our lives. Itâ€™s also a time to be grateful for the luxuries and securities that we haveâ€”to never take any of our material privileges for granted! Thanksliving is more like it because in my opinion, appreciating what we have while we have it is what can cultivate true happiness in our lives. Having Mamma Biscuit in my circle game of life has truly made me reflective about her life, her horrible past and of course, our lives before this beautiful creature became the lady of our home. So in honor of Mamma Biscuit, the Thanksgiving holiday and the true sentiments of Joni Mitchell, we dedicate this Thanksliving post to two very important people who were intrical to Mammaâ€™s second chance at life: DreÃ¡ from Curly Tail Pug Rescue and Julie from Massachusettsâ€”Mammaâ€™s amazing foster mother.

Firstly, we would like to thank DreÃ¡ from Curly Tail Pug Rescue for her dedication and tireless work! Curly Tail gives new life to tortured and unloved pugs everywhere with their relentless rescue efforts! Without such compassionate people like DreÃ¡ and the entire staff, Mammaâ€™s life would have been cut short like so many other unlucky dogs that come up through the puppy mill system.

Now before we hit the dinner table and stuff our faces with holiday food, letâ€™s give a big thanks to another hero from Mammaâ€™s past: Julie, Mamma Biscuitâ€™s foster mother! Let me start by saying that I have had the great pleasure of becoming Facebook friends with Julie and our friendship and this blog has made both of our experiences (fostering and adopting) one giant, happy, open adoption! Being able to talk and share with Julie (as well as DreÃ¡) about Mammaâ€™s past helps me understand her story and how I should move forward sharing it with you all. Speaking of you guys, Julie has sent me numerous photographs of Charlotte (Mammaâ€™s initial name given to her by Curly Tail) upon her rescue! So what better way to say thank you to you, the reader, who has supported this little blog from the very beginning than to give you all an exclusive look at never-before-seen photographs of Mamma Biscuit before she became Mamma Biscuitâ€”our favorite toothless glamour pug!

Here’s an initial photograph taken of Mamma Biscuit after her rescue and medical treatment! 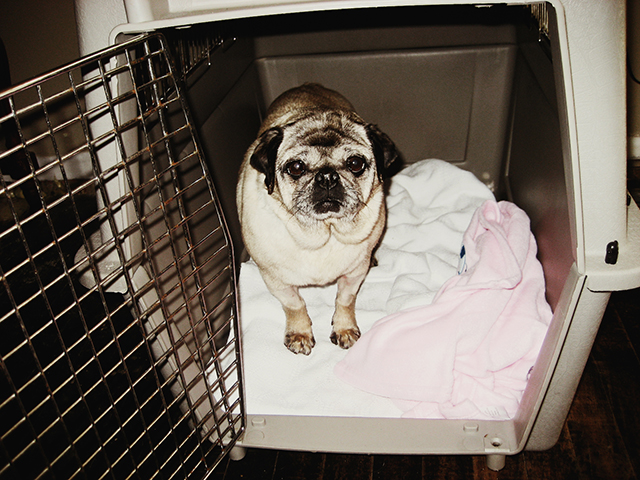 Now Mammaâ€™s journey escaping the puppy mill system was not an easy one. Speaking with Julie, we learned that she came with almost two dozen other pugs from the same mill via the underground railroadâ€”her words exactly! Curly Tail Pug Rescue got four of those pugsâ€”Charlotte, Wendy, Penelope and Romeo and the others went to G. M. P. R. (Green Mountain Pug Rescue) and P. P. R. A. (Precious Pug Rescue and Adoption). Kristin from Curly Tail picked up Mamma (then Charlotte) and the other three pugs in a Petco parking lot in New Hampshire early one morning.

Julie explains, â€œMamma arrived with another pug named Wendy who was overweight, emotionally damaged and afraid of peopleâ€”especially men. On the other hand, Charlotte was underweight! When Charlotte and Wendy saw each other at a fundraiser event after they had been in foster care for a while, they were instantly attracted to each other. I donâ€™t know if it was by smell or what but it was like they remembered each other?â€ Despite Wendyâ€™s emotional trauma and trust issues, one of Curly Tailsâ€™ volunteers ultimately adopted her. Below is a photograph of Charlotte and Wendy at the adoption/fundraiser event! Try not to scream from unbearable cuteness, you donâ€™t want to wake up the dead turkey in the ovenâ€”or in our house, itâ€™s Tofurkey! 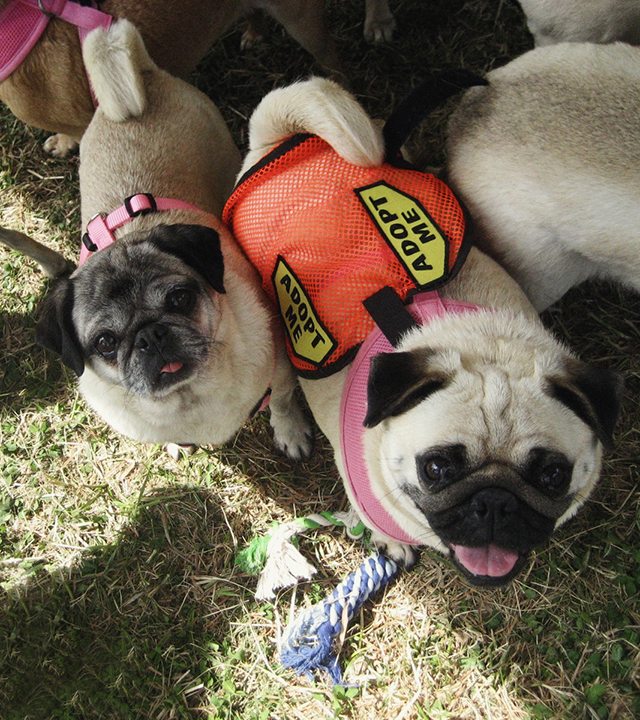 Julie goes on to describe her experience fostering Charlotte: â€œshe lived at my house with Marco Puggo (her own handsome pug) and also another foster pug named Murphy. Mamma was the lady of the house and was in charge! The day Mamma left my house she had a pep in her step and an attitudeâ€”like she was ready to rule the world. I gave her one million kisses and hugs and then she was led away by the transport team and never looked back! This was comforting to me as I was a mental patient learning that she was being adoptedâ€”especially by two men in the city! As far as I was concerned she needed a woman in the suburbs like me! Boy was I wrong! I guess thatâ€™s why they donâ€™t let me pick the homes! I wanted to adopt her but was told that if I kept her and my home was closed to fosters, I wouldnâ€™t be able to help another mill dog be saved from a horrible life! The worst part about saying good bye is that we are told by the rescue not to cry! It will upset the dogs. Can you imagine how hard this is??!! Heartbreaking!â€

Below is a montage of photographs sent to me by Julie during Charlotteâ€™s four month stay with her! Julie may not have been able to cry when Charlotte drifted out of her life but her experience captured here in photographs makes my eyes swell with tears! 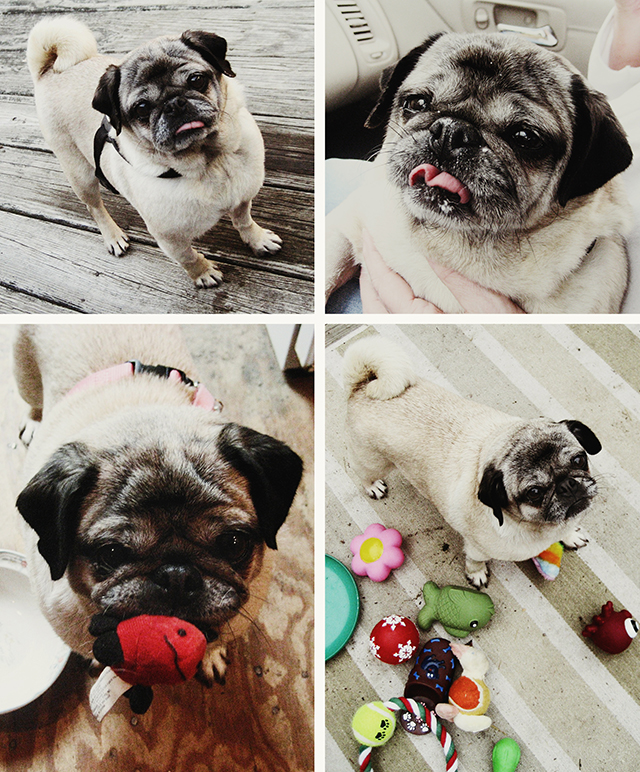 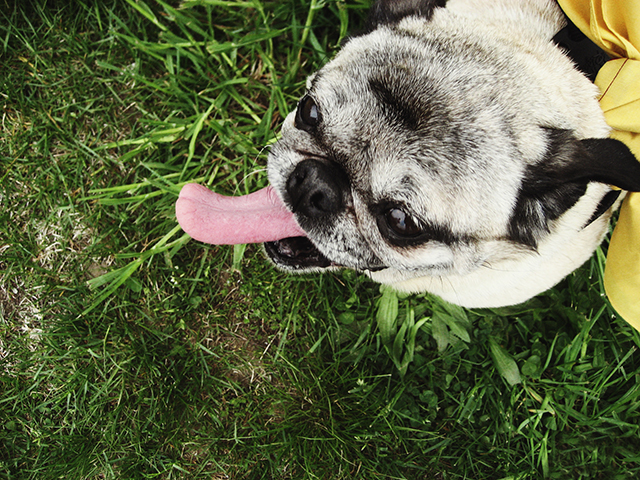 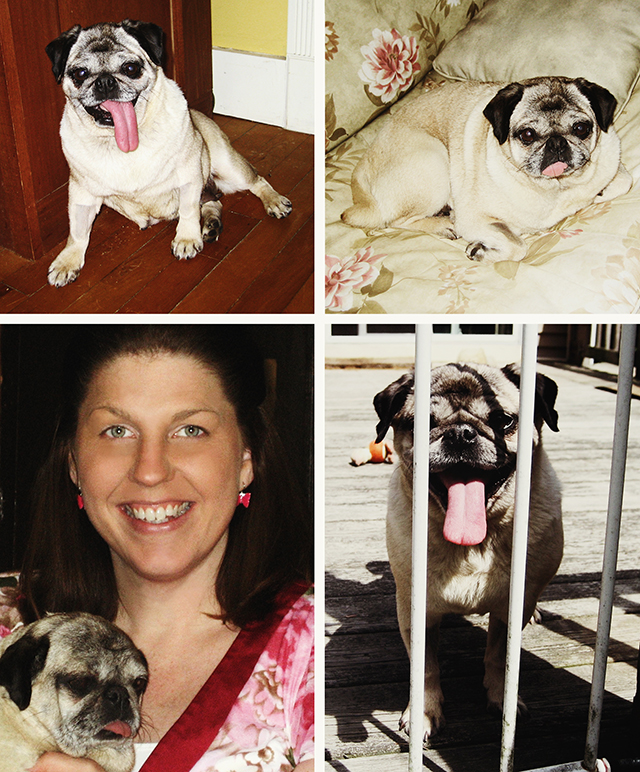 When Mamma left Julieâ€™s care, Julie thought she would never see her again but boy was she wrong. Thanks to the wonderful world of Facebook and Mammaâ€™s little corner on the web here, Julie and I were able to set up a reunion of sorts in NYCâ€”Times Square to be exact! So thatâ€™s what happened this past weekend, Tommy, Mamma Biscuit and I headed down to Times Square to meet up with Julie and her boyfriendâ€”they were visiting New York City for the day. Julie was just as lovely and humorous as I could have ever imagined and Mamma practically melted in her arms! Most of all, I loved how Julie kept nuzzling her lips in Mammaâ€™s floppy earsâ€”almost as if she were sharing a big secret with her! Julie, if you are reading this right now, your secret with Mamma Biscuit is safe with her! 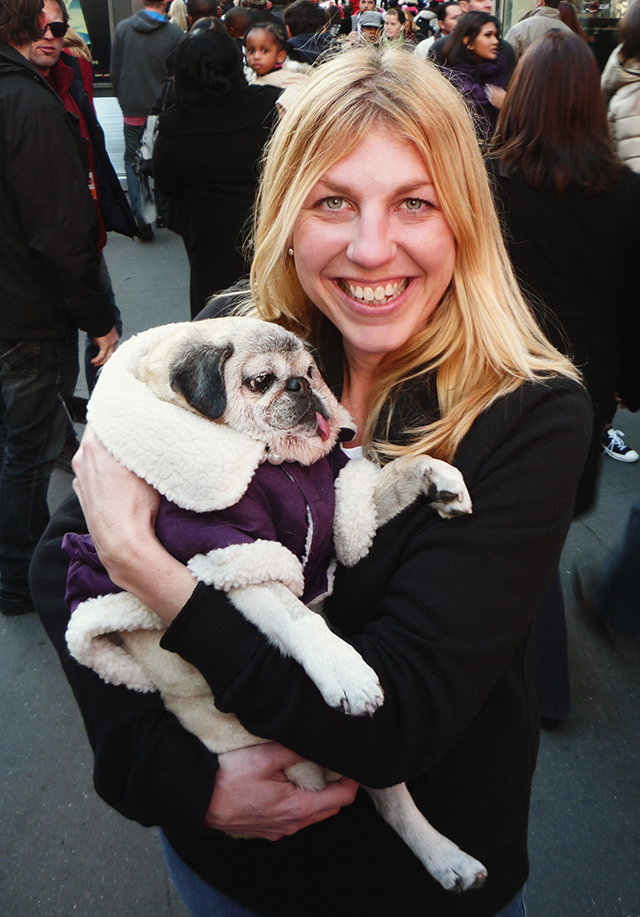 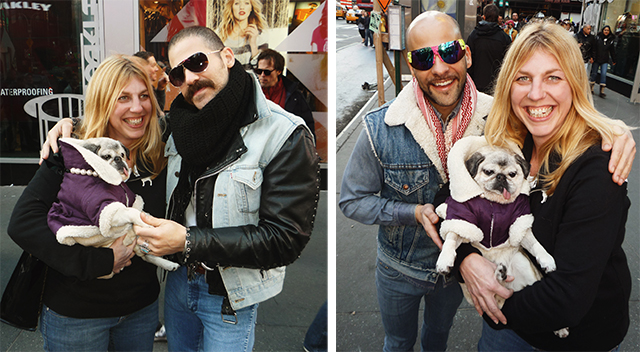 Now that youâ€™ve used up all of your Kleenex tissues while reading through Mammaâ€™s reunion with her foster mom Julie, below is a series of photographs of our glamorous and chic gremlin giving you all Thanksgiving realnessâ€”New York City style! Mamma Biscuit sure knows how to work a classic houndstoothe so when I saw this sweater in pink and black houndstoothe, I snatched it up for her with the quickness! This holiday is all about eating but the last thing I would want is for Mamma Biscuit to show up at her bowl of food wearing a bibâ€”what kind of parents do you think we are? Now feast your eyes on this fashion plate! 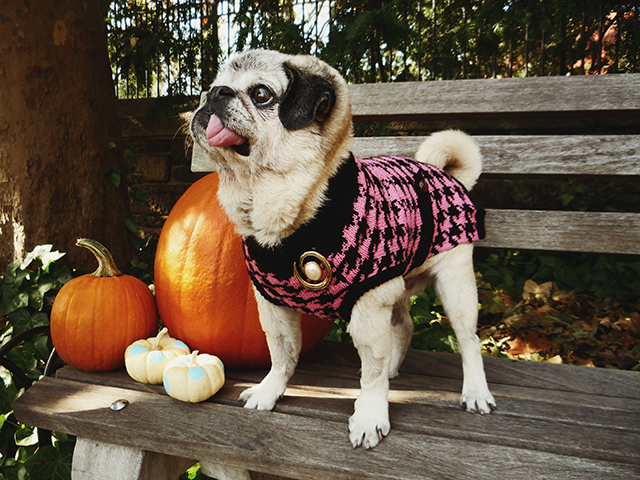 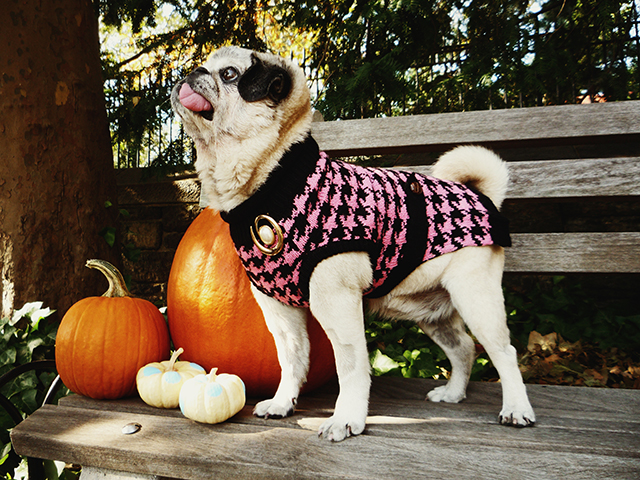 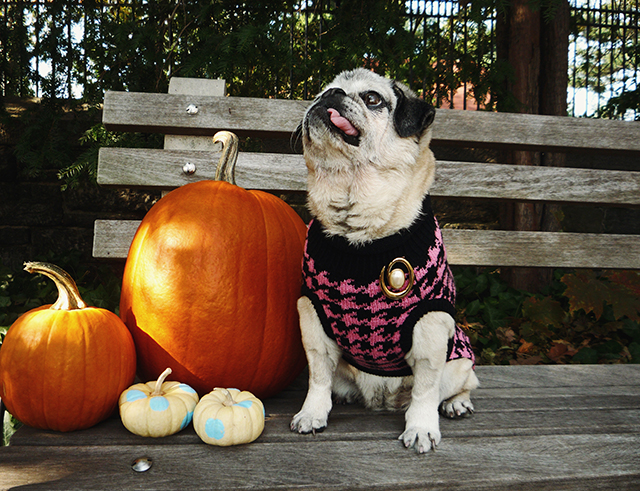 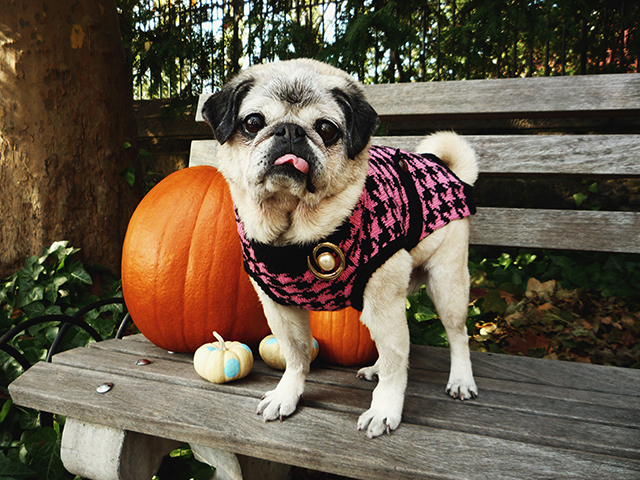 Oh and that fabulous gold brooch with a pearl center you see here was a hot find from an estate/apartment sale here in Washington Heights six months ago! Yes, only I can find an accessory for my pug while rummaging through a deceased woman’s closet! 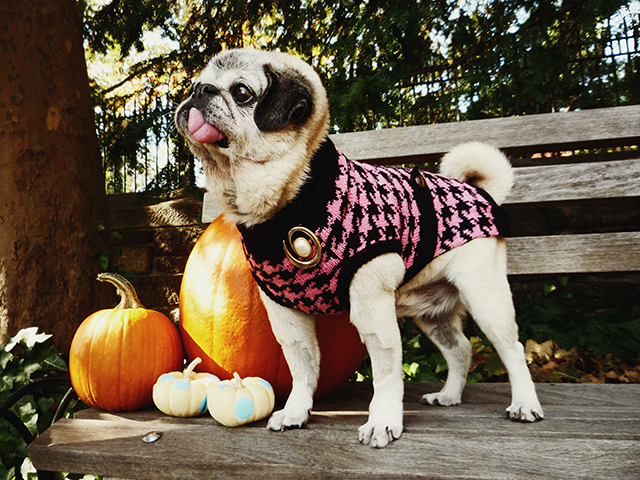 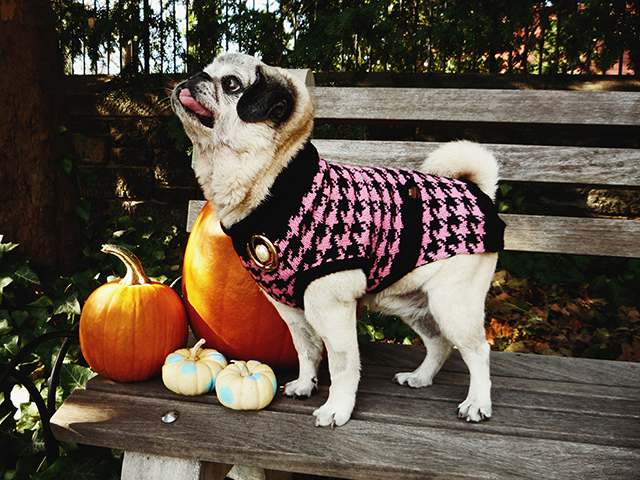 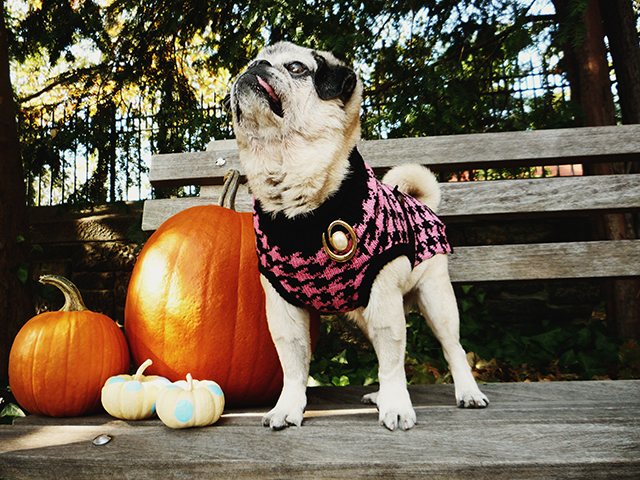 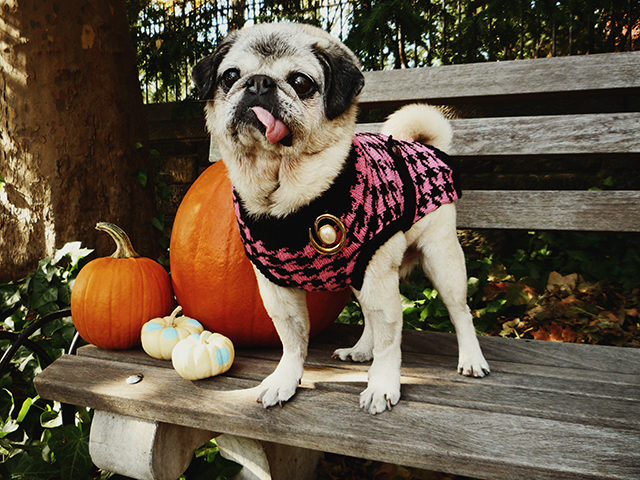 So this Thanksliving, we thank Mamma Biscuit for showing us the true magic of love and joy that dogs can bring to human beings and for simply being the fabulous pug that she is. Her terrible past is a painful yet important reminder that all suffering of animals (whether domesticated or farmed for food) deserves respect, love and nurture! Mammaâ€™s new life with us in New York City and this blog is a perfect example of how rewarding it is to rescue a dog in need and to generally demystify the notion that dogs that are either considered to be too old, imperfect (by some bullshit breeder standard) or with a damaged past are less valuable or desirable than dogs from pet stores or breedersâ€”the real root and cause for most of this torture to begin with. We continue this sentiment by thanking Farm Sanctuary for their tireless work in not only providing a safe-haven for animals that have endured pain and suffering beyond what anyone could ever imagine but that they also bring attention to such atrocities and demand reform where itâ€™s so desperately needed. 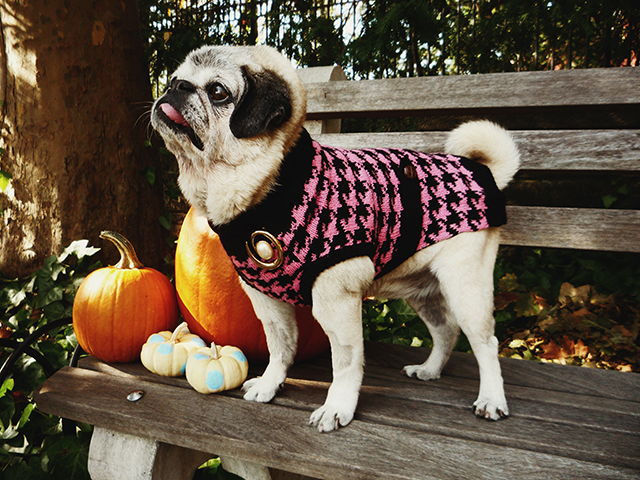 Have a Happy Thanksgiving, now let the Christmas games begin!

PS: check out these amazing photos of this year’s Feeding of the Turkeys Ceremony at Farm Sanctuary in Watkins Glen, New York: click here.

This entry was posted in Animal Welfare, Fashion, Holiday. Bookmark the permalink.