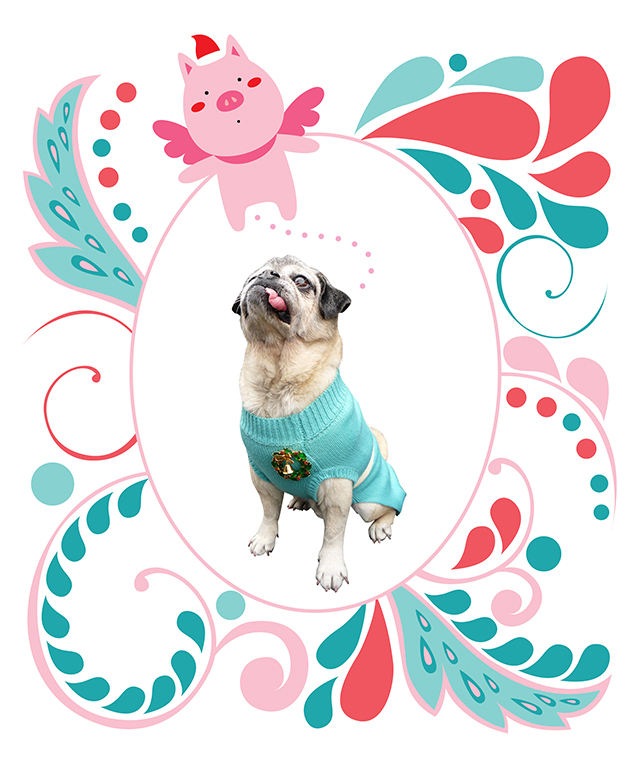 As we slowly inch our way to the big day when Santa stuffs his wide ass down your chimney (or breaks into your apartment via the fire escape for all you urban dwellers), Mamma Biscuit and family will begin the task of unveiling the numerous festive displays decking the hallways of the Pug Palaceâ€”all for your enjoyment of course! You all know the drill by now; weâ€™re obsessed with Christmas the same way a Midwestern teen is obsessed with crystal meth! So come along for the sleigh ride! The next two weeks will be all about ornaments, trees, lights and boughs of hollyâ€”and Mamma Biscuit will be dodging all of this Christmas crap in order to sniff her way to her bowl of food–because to our gremlin, thatâ€™s all that matters, FOOD! The rest is just an obstacle that gets in the way between her and her food! Speaking of food and having a large appetite, we devoted an entire tree that stands proudly in our master bedroom adorned with vintage hand blown glass pig ornaments from the U.S.S.R. circa 1988. Now there may be one little vowel that separates the word pug from the word pig but the two animals have a whole lot in common! They both snort and they both enjoy eating at the drop of a hat so it seemed fitting to put up such a tree at the pug palace! 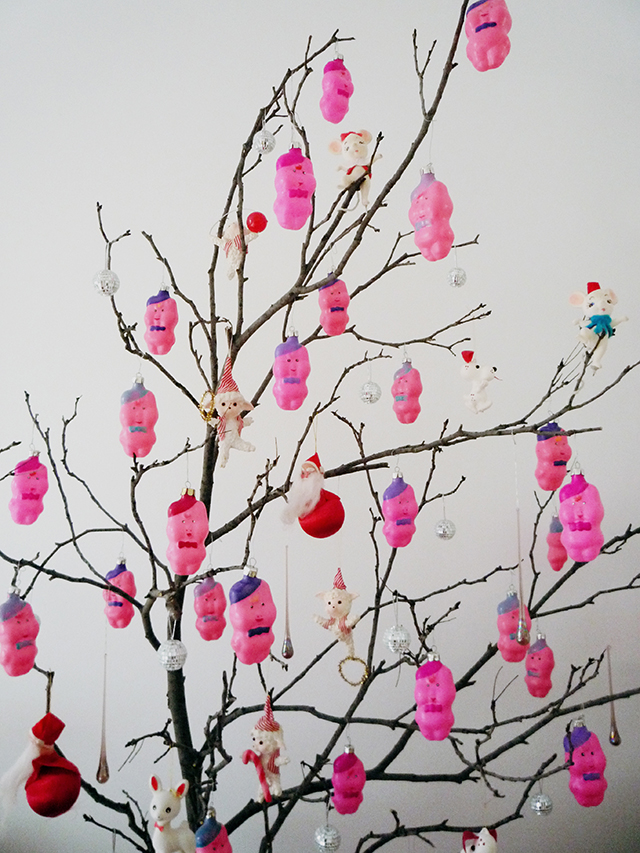 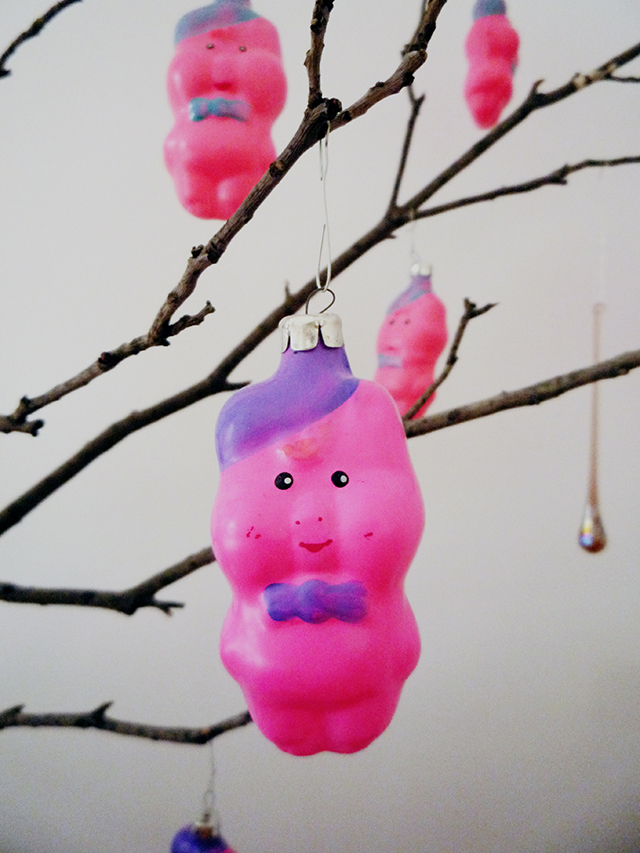 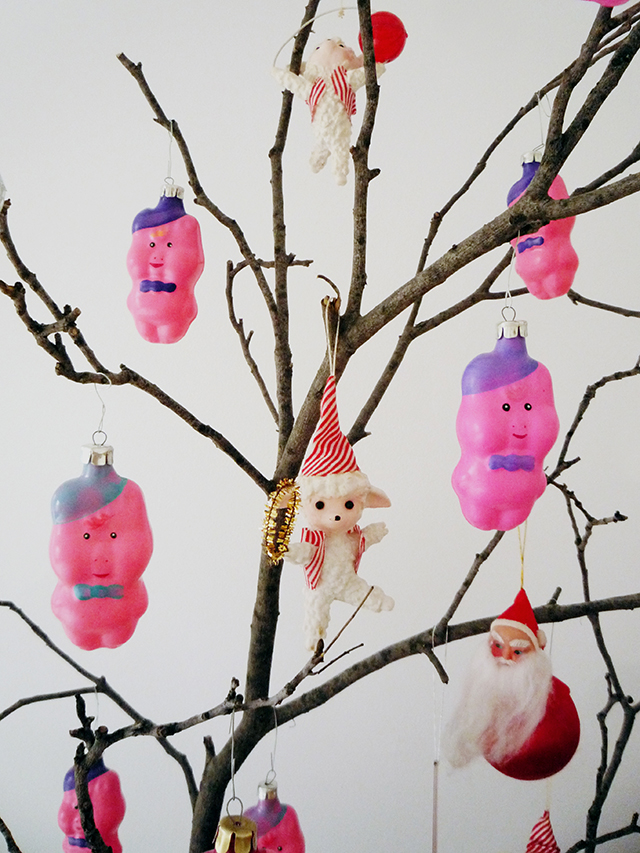 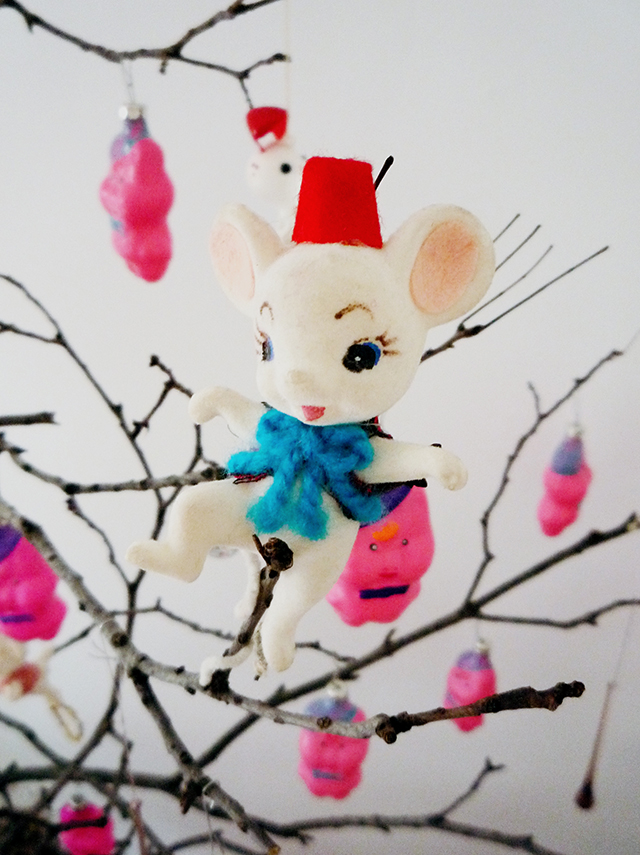 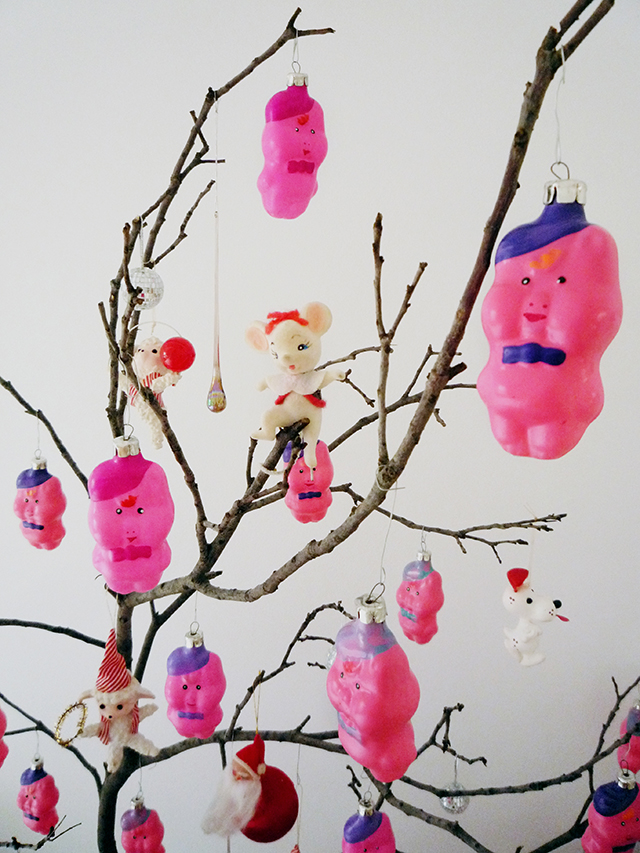 So last year, I explained to you all just how hard it was to find these pink glass pig ornaments from Russia! In case you were wondering, weâ€™re no strangers to Ebay and thatâ€™s exactly where they came from. A seller had a big lot of them for a fairly good price a few years back that I have yet to see again regarding this style of vintage ornament! I have seen these pigs in other colors though (baby blue and mint green) which has gotten us all excited at the prospects of adding to this tree, but for now, it remains Mammaâ€™s pink pig tree! As I said last year and I think bears repeating, these pig ornaments came in their original boxes stamped with â€œMade in the U.S.S.R.â€ in ink on the backside of the box and I can just envision an angry, old, bloated battle-axe left over from the Stalin years packing them into their respective boxesâ€”and somehow, that idea comforts me! 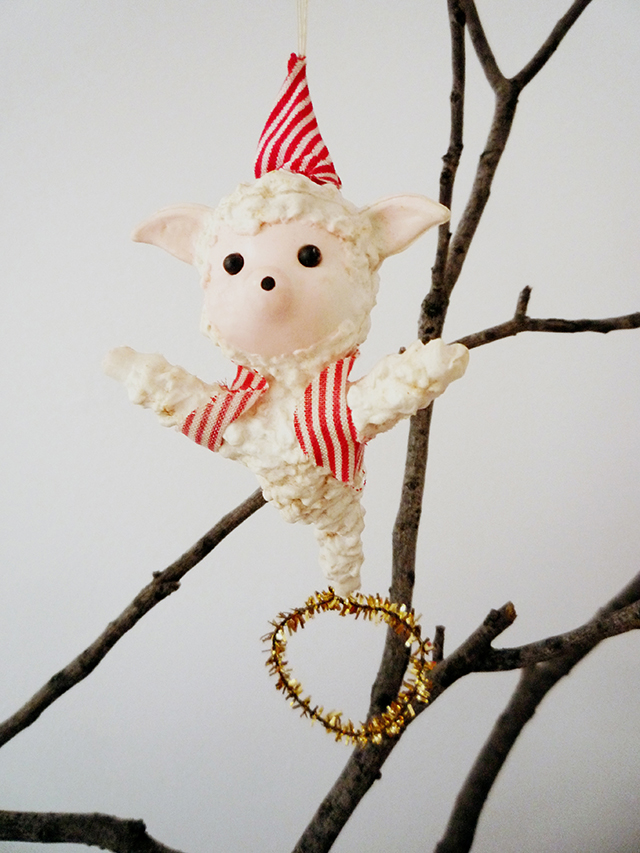 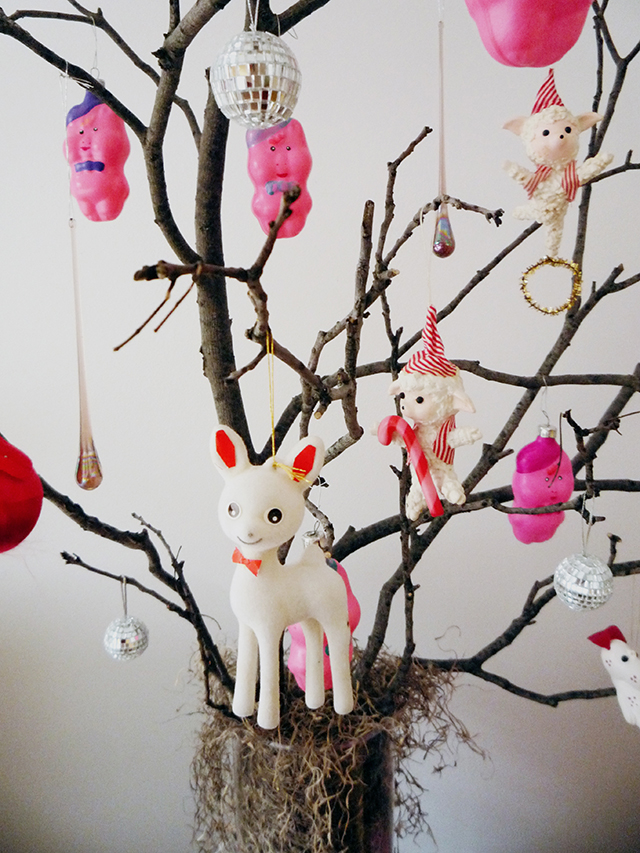 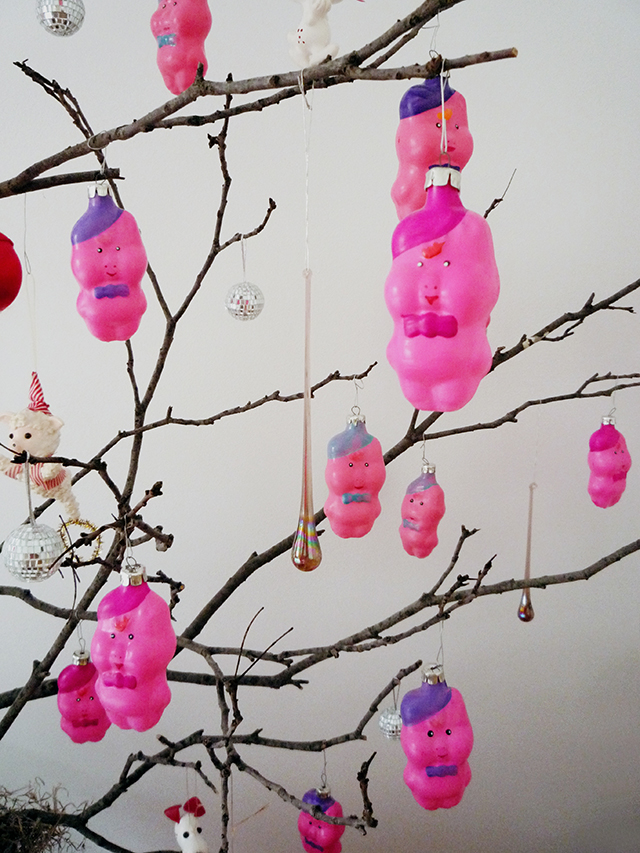 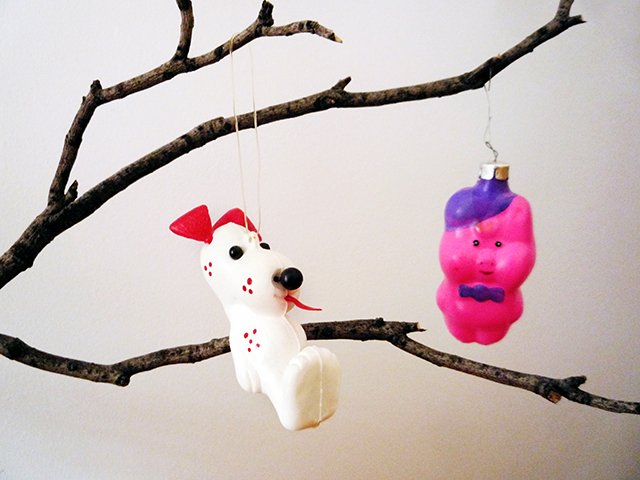 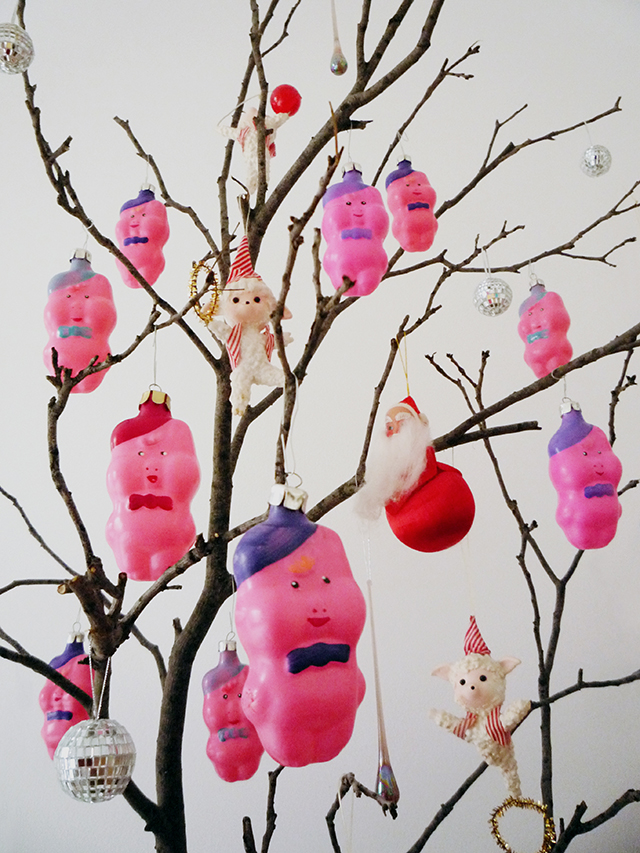 During one of our rainstorms here in NYC, Tommy found a heap of branches in the park that had fallen down from various trees and that were just ripe to be collected for our displaysâ€”Halloween as well as Christmas! So this year, the tree itself is all new and the branches really have that sturdy, wintery look! Our pigs hang alongside an array of plastic and flocked ornaments of circus dogs, mini disco balls and glass icicle dropsâ€”in other words, this tree is super gay! 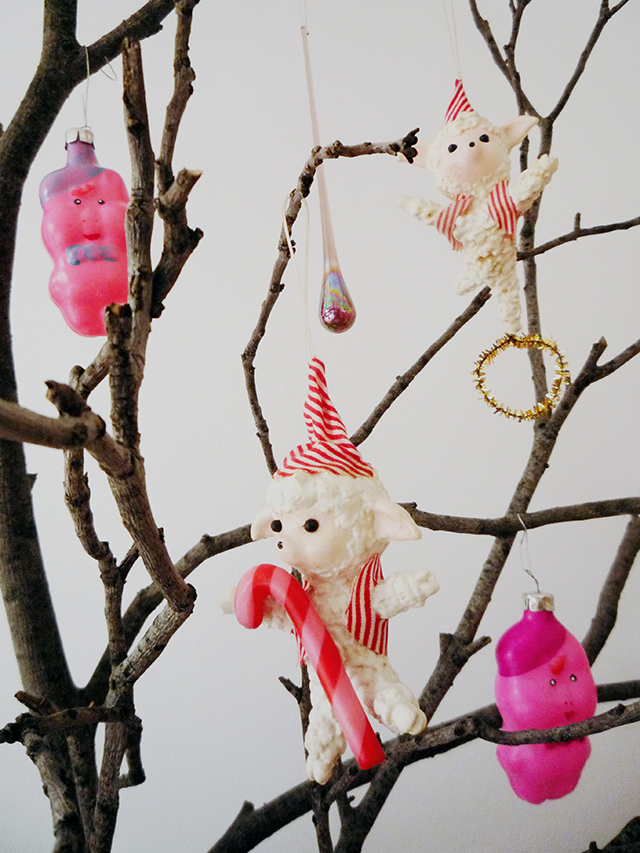 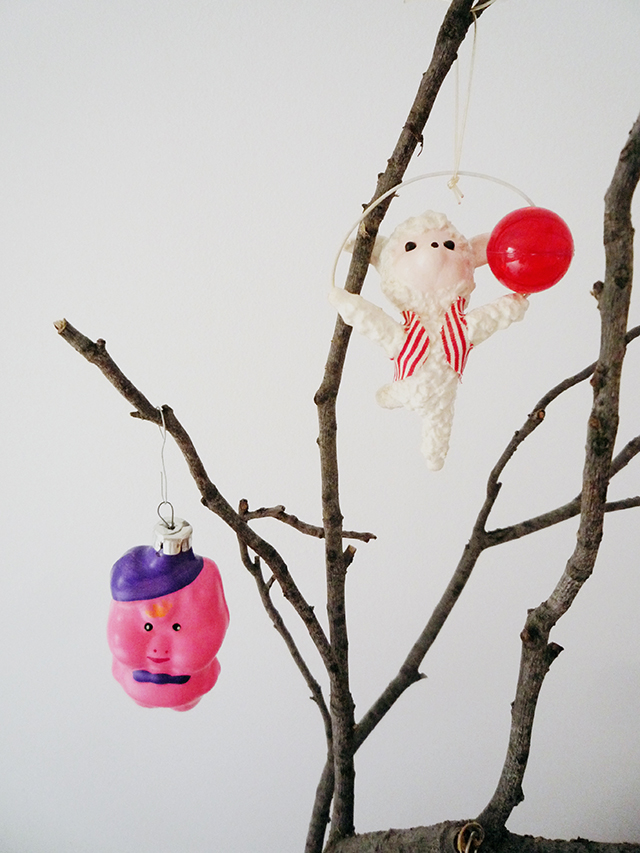 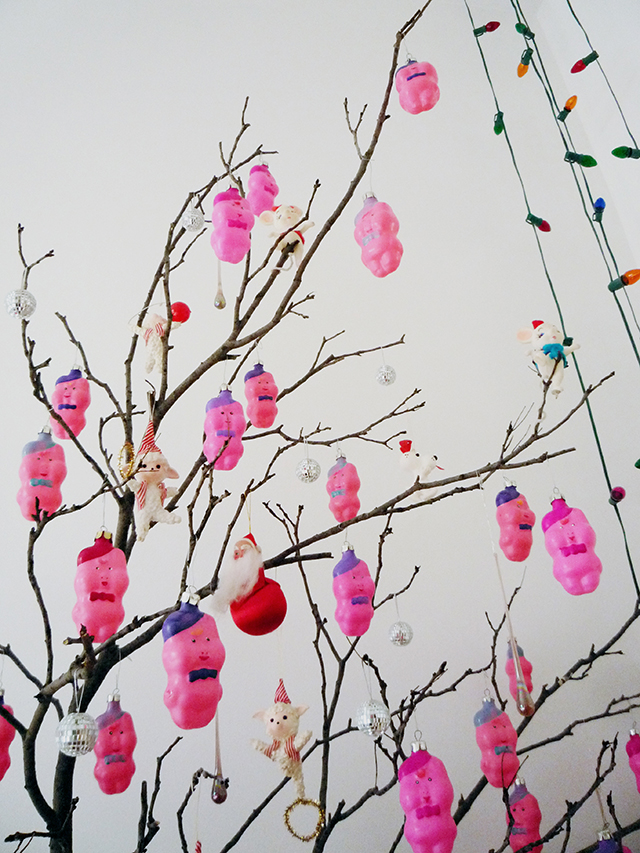 So thatâ€™s it folks, Mammaâ€™s pink pig tree is up and itâ€™s glorious! We expect the entire LGBT community here in NYC to make a holiday pilgrimage up to the Pug Palace to bask in all of its amazing gayness!

This entry was posted in Holiday, Vintage. Bookmark the permalink.

7 Responses to A Pug-Pig Christmas!